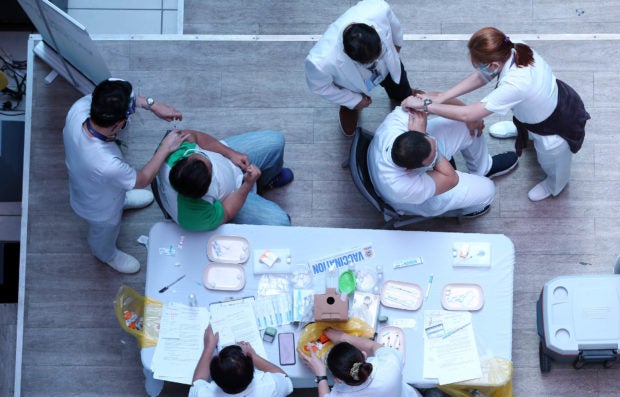 This photo, taken in March 2021, shows health workers in Mandaluyong City getting vaccinated against COVID-19 as they face a higher risk of infection. (File photo by NIÑO JESUS ORBETA / Philippine Daily Inquirer)

MANILA, Philippines — The incidence of COVID-19 infections nationwide appears to be leveling out, but a closer look will show that infections are increasing in the Visayas and Mindanao, Health Secretary Francisco Duque III said on Monday.

Duque presented during President Rodrigo Duterte’s pre-recorded briefing a graph showing that the national average of new COVID-19 cases daily, from June 7 to 13, were at 6,609 — not far from the 6,558 from May 31 to June 6.

However, the number of cases per region showed an upward trend in the Visayas and Mindanao, compared to the plateau seen over the-so called National Capital Region (NCR) Plus — that is, Metro Manila, Bulacan, Cavite, Laguna, and Rizal — and the rest of Luzon.

“It can be seen that the movement of cases continued to plateau,” Duque said in Filipino. “And here is the epidemic curve in the various places in the Philippines. We can see here — if we look at the cases per island group — that the cases in the NCR continued to go down, although slowly, while in the last seven days those in the Plus areas have plateaued.”

“And then those in the rest of Luzon also plateaued. We can see that they went up and then plateaued this week,” he added. “And at the same time, the cases continued to rise in the Visayas… where the cases rose by more than 31 percent this past week compared to the week before that. So it’s the same thing in Mindanao: The cases also went up, but it’s good that it plateaued a bit.”

Duque highlighted these developments even more by presenting the average daily attack rate (ADAR) of the NCR and other high-risk areas. The ADAR measures the rate of infection per 100,000 of the population.

Soccsksargen showed an increase in healthcare utilization rate, which shows how much of COVID-19 patients need heightened medical care as measured by beds occupied. As of June 11, the region’s utilization rate has increased from 49 percent to 63 percent of isolation beds and from 61 percent to 83 percent of intensive care unit (ICU) beds.

Western Visayas also had an increase in its healthcare utilization rate as of June 11 — from 61 percent to 63 percent of isolation beds occupied and from 80 percent to 85 percent of ICU beds.

Last June 7, Duque also explained why COVID-19 cases nationwide remained high despite the decrease of cases in the NCR.  Back then, he said that other areas outside of Metro Manila —  particularly Calabarzon, Western Visayas, and some parts of Mindanao — also saw an increase in infections.