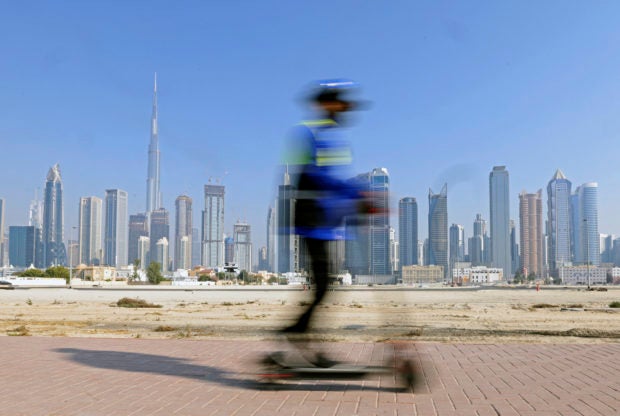 A man rides his electric scooter in Dubai backdropped by the Gulf emirate’s high rise buildings on February 16, 2021. AFP

DUBAI — Tax advantages paired with a life of luxury have long drawn foreigners and multinationals to the UAE, which is aiming to remain attractive whether or not it signs up to a global tax initiative.

The objective is a minimum tax of at least 15 percent.

While the agreement is the first step in a long process before it can become a reality, caught in the crosshairs are tax havens that attract firms such as Amazon, Apple, Google and Facebook.

The United Arab Emirates entered the world’s top 10 tax havens for the first time in March, according to the Tax Justice Network.

Modestly called “jurisdictions with no or insignificant taxes” by the Organization for Economic Cooperation and Development (OECD), the havens include the Bahamas, the British Virgin Islands, Guernsey, Jersey, the UAE and many others.

Both the UAE capital Abu Dhabi and freewheeling Dubai, the biggest draw for investors out of the UAE’s seven emirates, are home to thousands of companies that have set up regional offices there.

UAE officials have yet to issue a statement on the G7 agreement and did not respond to an AFP request for comment.

But this week Dubai announced plans to reduce in the coming months government procedures as “part of efforts to reduce the cost of doing business and further boost economic growth in the emirate”.

Hard-hit by the coronavirus pandemic, the UAE has already launched a series of reforms, including to allow foreigners full ownership of businesses, whereas before it was capped at 49 percent unless based in certain free trade zones.

Economy Minister Abdulla bin Touq Al Marri said the changes were a bid to boost the “competitive edge” of the country, currently 16th in the World Bank’s ease of doing business rankings.

The UAE, which relies on its image as an international hub, “will be keen to be seen as part of the global system rather than a tax haven,” said Scott Livermore of Oxford Economics Middle East.

“The upsides of remaining on the outside of the agreement is limited, especially if approved by the G20 and OECD countries,” the Dubai-based economist told AFP.

According to Livermore, even if businesses in the country see an increase in tax burden, the government was likely to “consolidate and simplify fees”, as is the case in Luxembourg and Malta, where multiple exemptions lower the final bill considerably.

“Already the authorities have realized the importance of broader business and social environment for attracting and retaining foreign investment and talent,” he said.

“This has been demonstrated by the raft of visa and business reforms announced over the past year.”

Many foreign executives are attracted to the lifestyle in Abu Dhabi and especially Dubai.

The two emirates are air hubs and offer a variety of luxury services that depend on a migrant labour force largely from South Asian countries.

The UAE’s low tax regime has been a “major carrot to dangle” before investors from abroad, said Robert Mogielnicki, senior resident scholar at the Arab Gulf States Institute in Washington.

“Emirati policymakers will have to get creative and consider restructuring various business-related fees,” he told AFP.

“But even with the envisioned impact of a minimum global corporate tax, the UAE will remain a relatively low-tax environment.”

And regardless of new taxes introduced in Gulf countries in the past years amid an economic slump due to a drop in oil prices, Mogielnicki believes the Emirates will remain competitive.

“I don’t think the UAE government or its citizenry will truly miss any of the firms or investors who only care about preferential tax treatment over the long run –- even if missing out on some business opportunities will sting over the short run.”