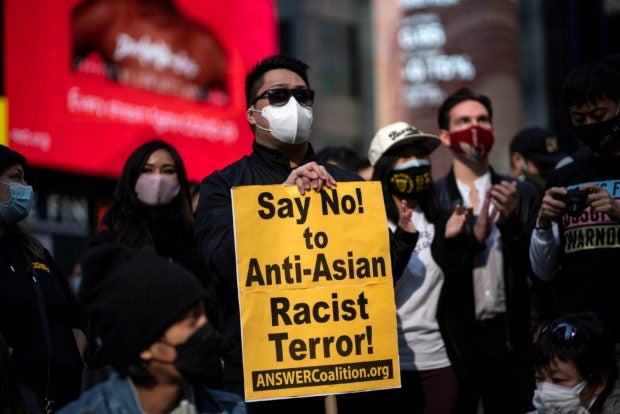 MANILA, Philippines — A Philippine Consulate General diplomat  became the latest victim of racism and “Asian hate” after she was verbally harassed and assaulted in New York City subway train on Friday.

“On Friday, one of our colleagues at the Philippine Consulate General in New York became the latest victim of anti-Asian hate. Our colleague, a female consular officer, was verbally assaulted while on board the B train on her way to the Consulate yesterday morning,” said Consul General Elmer Cato.

On Friday, one of our colleagues at the Philippine Consulate General in New York became the latest victim of anti-Asian…

According to Cato, this is the 14th anti-Asian hate crime involving a member of the Filipino Community reported to the Consulate so far this year.

Cato said that the incident has already been reported to the New York City Police Department.

“We are deeply disturbed by this incident which came a few days after a member of the Filipino community sustained injuries after he was violently assaulted in a subway platform in New York City,” said Cato on Saturday in a statement posted on Fsocial media.

Just a few months ago, a 61-year-old Filipino man got his face slashed in the New York City subway.

“We join the Asia-American and Pacific Islander Community in condemning these incidents and in expressing our serious concern for the safety of our kababayan (countrymen) and other Asian-Americans in New York City,” said Cato.

“We call on authorities of New York City to take additional measures to make our kababayan and other Asian-Americans feel safe when outside their homes by increasing police presence especially in the subways and addressing the mental health concerns that reportedly affect as many as 40 percent of homeless individuals in the city, a number of who have also been involved in recent hate crimes against Asian Americans,” he added.

Cato urged all Filipino-Americans to remain vigilant outside their homes and when taking the subway.

“Kababayan should immediately call 911 if they witness any hate crime or if they become victims themselves. They are also encouraged to report any incidents to the Consulate,” he said.

VP Leni on anti-Asian hate crimes: ‘Hatred has no place in any society that wishes to heal’