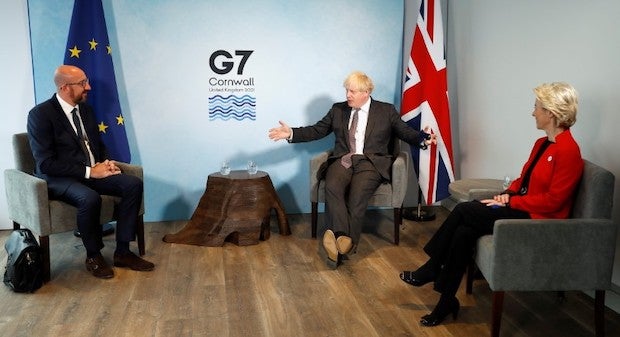 CARBIS BAY, England — Britain will do “whatever it takes” to protect its territorial integrity in a trade dispute with the European Union, Prime Minister Boris Johnson said on Saturday, threatening emergency measures if no solution was found.

The threat by Johnson seemed to break a temporary truce in a war of words over part of the Brexit deal that covers border issues with Northern Ireland, the focus for tensions since Britain completed its exit from the EU late last year.

Despite U.S. President Joe Biden encouraging them to find a compromise, Johnson used a G7 summit to indicate no softening in his position on what is called the Northern Ireland protocol that covers border issues with the British province.

“I think we can sort it out but … it is up to our EU friends and partners to understand that we will do whatever it takes,” Johnson told Sky News.

“I think if the protocol continues to be applied in this way, then we will obviously not hesitate to invoke Article 16,” he added, referring to a safeguard clause that allows either side to take measures if they believe the agreement is leading to economic, societal, or environmental difficulties.

“I’ve talked to some of our friends here today, who do seem to misunderstand that the UK is a single country, a single territory. I just need to get that into their heads.”

The EU told the British government once again that it must implement the Brexit deal in full and introduce checks on certain goods moving from Britain to Northern Ireland. Britain repeated its call for urgent and innovative solutions to ease the friction.

No narrowing of positions

The province has an open border with EU member Ireland so the Northern Ireland protocol was agreed as a way to preserve the bloc’s single market after Britain left.

The protocol essentially kept the province in the EU’s customs union and adhering to many of the single market rules, creating a regulatory border in the Irish Sea between the British province and the rest of the United Kingdom.

Since Britain exited the bloc’s orbit, Johnson has unilaterally delayed the implementation of some provisions of the protocol, including checks on chilled meats such as sausages moving from the mainland to Northern Ireland, saying it was causing disruption to some supplies to the province.

“Both sides must implement what we agreed on,” von der Leyen, European Commission president, said after meeting Johnson alongside Michel, the European Council president.

“There is complete EU unity on this,” she said, adding that the deal had been agreed, signed and ratified by both Johnson’s government and the bloc.

Germany’s Merkel said the two sides could find pragmatic solutions on technical questions, while the EU protected its single market.

Earlier this week, talks between the two sets of negotiators ended in an exchange of threats over the so-called “sausage wars”. An EU official said at the G7 that there was a need for the rhetoric to be toned down.

The head of the World Trade Organization said she hoped the tensions would not escalate into a trade war.

That agreement largely brought an end to the “Troubles” – three decades of conflict between Irish Catholic nationalist militants and pro-British Protestant “loyalist” paramilitaries in which 3,600 people were killed.

Though Brexit was not part of the formal agenda for the G7 summit in the English seaside resort of Carbis Bay, it has more than once threatened to cloud the meeting.

France’s Macron offered to reset relations with Britain as long as Johnson stood by the Brexit deal – a characterisation of the meeting that was rejected by the British team.

Brexit has also strained the situation in Northern Ireland, where the pro-British “unionist” community say they are now split off from the rest of the United Kingdom and the Brexit deal breaches the 1998 peace deal. But the open border between the province and Ireland was a key principle of the Good Friday deal.