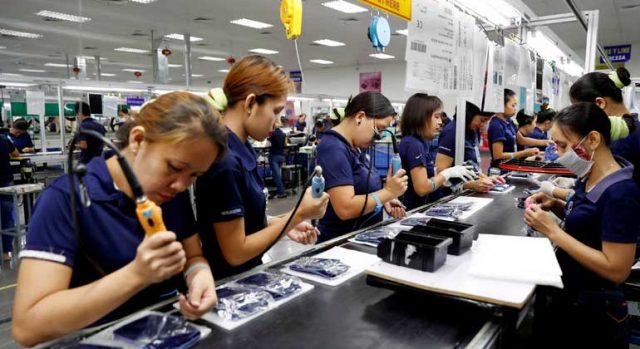 Preliminary results of the PSA’s latest Monthly Integrated Survey of Selected Industries showed factory output, as measured by the volume of production index (VoPI), surged by 162.1% year on year in April. This marked a reversal from the 73.3% annual decline recorded in the previous month as well as the 64.8% drop in April 2020.

So far, factory output has averaged by a 19.6% decline this year.

Twenty out of 22 industry divisions posted year-on-year growth in April, 15 of which were in triple digits led by the manufacture of basic metals (687.5%); fabricated metal products, except machinery and equipment (610.1%); and furniture (577.4%).

On the other hand, the manufacture of coke and refined petroleum products continued to post an annual decline in April at 32.3%, though slower than March’s 97.5% fall. Likewise, the manufacture of basic pharmaceutical products and preparations shrank by 18.9% in April, softer than 27.7% in the previous month.

Capacity utilization — the extent to which industry resources are used in producing goods — inched up to 63.6% in April from 63% in the previous month.

Eighteen out of 22 industry divisions averaged a capacity use rate of at least 50% in April, led by the manufacture of furniture (81.3%), nonmetallic mineral products (80.9%), and electrical equipment (75.2%).

In comparison, the IHS Markit Philippines Manufacturing Purchasing Managers’ Index (PMI), which is based on survey responses, fell to 49 in April from 52.2 in March. The country’s PMI in April fell below the neutral 50 mark that separates expansion from contraction. This means the respondents that reported a decrease outweighed those that reported an increase with regard to indicators like output, new orders, inventory, employment, input and selling prices, as well as sentiment over the following 12 months.

In an e-mail, UnionBank of the Philippines, Inc. Chief Economist Ruben Carlo O. Asuncion attributed the April VoPI results to base effects as the same month last year brought manufacturing to a near standstill at the onset of the coronavirus disease 2019 (COVID-19) pandemic.

“The first lockdown in April 2020 rendered everyone clueless of how to approach the spreading virus. Fast forward to April 2021… companies and employees have somehow adjusted to the restrictions made by the government to help curb the virus’ spread. I think this has helped somehow and production has clearly adjusted to the new normal,” Mr. Asuncion said.

Federation of Philippine Industries Chairman Jesus L. Arranza recounted several problems that hounded manufacturing last year, including the lack of transportation for factory workers, the pause in construction of commercial and residential buildings, and other issues concerning the opening of establishments as these sorts of work “cannot be simply done from home.”

“[It’s much better lately], because manufacturing industries have synchronized by now with the pandemic restrictions,” Mr. Arranza said in a phone interview.

He added that recovery might have subdued given the reimposition of stricter lockdown measures in Metro Manila and nearby provinces from late-March to mid-May.

Mr. Arranza hopes to see a further rebound in manufacturing as the country’s vaccine rollout picks up and economic activity recovers.

“With more vaccine supplies coming online, economic recovery prospects may continue to be better, and with this, the environment may continue to recover from the lack of consumer and business confidence in the last months,” the economist said. — Bernadette Therese M. Gadon