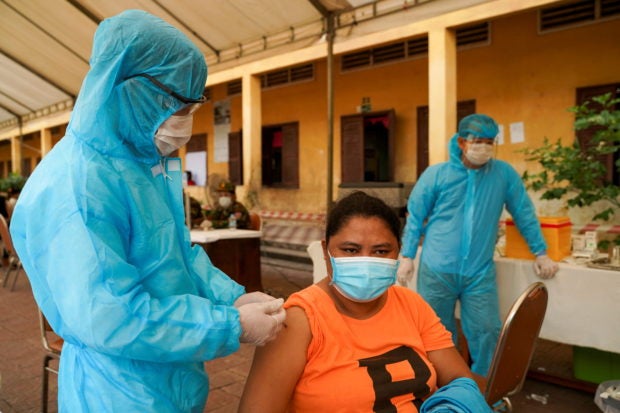 FILE PHOTO: A Cambodian army member vaccinates a person inside a red zone with strict lockdown measures, amidst the latest outbreak of the coronavirus disease (COVID-19), in Phnom Penh, Cambodia, May 1, 2021. REUTERS/Cindy Liu/File Photo

PHONM PENH — Almost one in every five Cambodians has already received a dose of anti-coronavirus vaccine, catapulting the country well past wealthier, bigger Southeast Asian neighbors. Like the doses, the success story is labeled “Made in China”.

Already one of China’s closest allies, Cambodia kickstarted inoculations with a bigger donation of vaccines from China than any other country in the region – in addition to Chinese vaccines it had already bought itself.

Cambodia’s early progress reflects Beijing’s vaccine diplomacy in a region where competition with U.S. influence is intense but has increased concerns among some Cambodians over the closeness of those ties. The United States announced its first major donations to Asia last week.

“The question is asked whether Cambodia is too dependent on China,” authoritarian Prime Minister Hun Sen said in a recent speech. “If I don’t rely on China, whom should I rely on? Without the donations and sales of vaccines from China, we would not have vaccinated the Cambodian people.”

Only the wealthy city-state of Singapore has made more rapid progress in Southeast Asia relative to population.

Some 16% of Cambodia’s 16 million people have had at least one vaccine dose, according to official numbers. Close behind are tiny Brunei and then Laos, another state with very close links to Beijing.

Much bigger Malaysia and Indonesia had only managed 7.6% and 6.6% respectively, with Thailand on 4.6% and the Philippines 4.2%, according to the latest official data.

In Vietnam, where anti-China feeling runs strong, little more than 1% of the population had been covered. Hanoi only approved a Chinese vaccine for emergency use on June 4.

“The Cambodian vaccination campaign depends on the use of Chinese vaccines, the road that Hanoi is not willing to take,” said Nguyen Khac Giang, a PhD candidate at Victoria University of Wellington.

As Cambodia faced its worst surge of the virus last month, China pledged full support “which not only embodies the two sides’ special friendship but China’s responsibility for the China-Cambodia community of a shared future,” China’s Global Times quoted foreign ministry spokesman Zhao Lijian as saying.

Over 90% of the vaccines Cambodia has used so far are Chinese – from donations totaling 1.7 million doses as of late April, and purchases of 4 million doses from Chinese drugmaker Sinovac. The only other vaccines used have been from the global COVAX program, set up to assist inoculation in less wealthy countries.

“China is the first country to give aid to Cambodia, they let Cambodians get vaccinated and the quality is good,” said 19-year-old Sinopharm-vaccinated waiter Song Sok Putheara.

But he added: “They help us too much and too often like they are holding hands and not letting us go.” 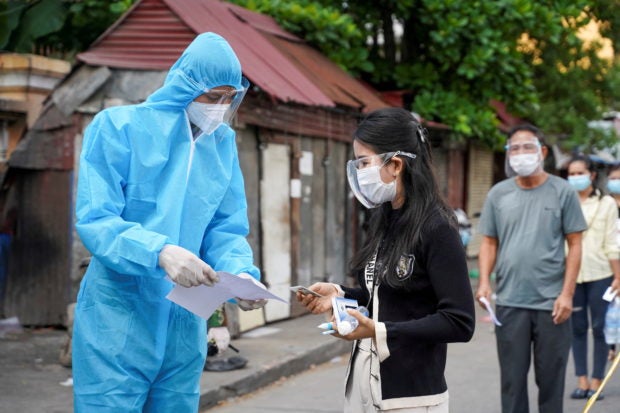 FILE PHOTO: A Cambodian army member checks an ID as people are vaccinated inside a red zone with strict lockdown measures, amidst the latest outbreak of the coronavirus disease (COVID-19), in Phnom Penh, Cambodia, May 1, 2021. REUTERS/Cindy Liu/File Photo

Still, China’s ties with Cambodia have suited both governments.

China stepped up aid and investment even as Hun Sen was condemned by Western countries for alleged human rights abuses and the crushing of his political opposition.

Meanwhile, Cambodia has backed China’s position on its extensive claims in the South China Sea against Southeast Asian rivals. It also has growing defense ties – while denying U.S. accusations it is becoming a forward base for China’s People’s Liberation Army.

“Vaccines have become an act of political diplomacy to make and increase Chinese influence in the region, in the world, and in Cambodia,” said Pa Chanroeun, president of the Cambodian Institute for Democracy think tank.

Elsewhere in Southeast Asia, Chinese vaccine donations have not been as generous as in Cambodia, but purchased Chinese vaccines have been vital in Indonesia, Thailand, and the Philippines.

Most of the tens of millions of vaccine doses in Indonesia have been made by Chinese companies.

The fact that China made its vaccines available on a large scale created a lot of goodwill, said Dewi Fortuna Anwar, a foreign policy expert at the Indonesian Institute of Sciences.

While it wouldn’t erase strains such as those over the South China Sea, it would make a difference, she said.

“If you develop cooperation in low security-sensitive areas and then you develop trust then that prevents conflict. I think that’s also the case with China and Indonesia,” she said.

So far, a total of 7 million shots are to be shared across a region of over 2.5 billion people. Indonesia will be among the recipients. Cambodia will not.