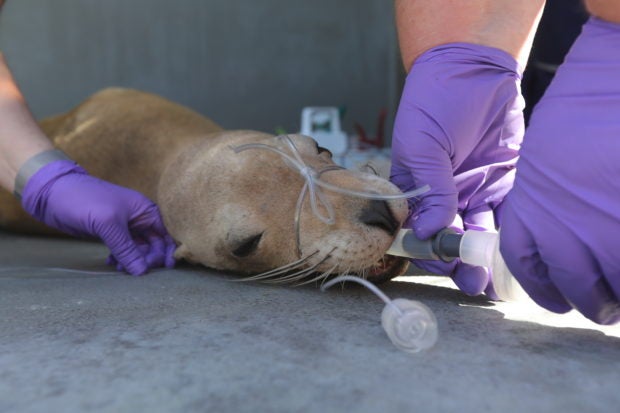 She was thin and underweight, swayed her head back and forth, and did not flee as people approached, said Dr. Cara Field, medical director at the Marine Mammal Center in Sausalito.

“All of those things tell us there’s something wrong, but we didn’t know what it could be until we got her here,” Field said.

Once the sea lion was sedated and intubated in a quarantine cell on the center’s grounds for an ultrasound, more worrying signs appeared.

“That’s a very, very bad kidney,” Field said, leaning over the sea lion while looking at the ultrasound screen. “With cancer, what we often see is the cancer has metastasized.”

The sea lion inspected on this day was euthanized, a common ending for California sea lions brought here for what has become a frequent and untreatable diagnosis – urogenital carcinoma.

It has wreaked havoc on these marine mammals.

According to a study published in December in Frontiers in Marine Science, almost 25% of adult California sea lions end up with this cancer, the highest prevalence of cancer in any mammal, including humans.

“This is extraordinary and really quite awful,” Field said. “This is an unprecedented rate of cancer in wildlife.”

The study found two leading culprits behind the high cancer rates – long-banned chemical pesticides such as DDTs and polychlorinated biphenyls (PCBs) found in the sea lions’ blubber tissue, and the presence of a cancer-causing herpes virus known as Otarine herpes virus (OtHV-1).

“Very few animals that had cancer did not have the virus,” said Dr. Padraig Duignan, director of pathology at the center and a co-author of the study. “But then when you looked at the levels of chemicals in their blubber and you factor that in, the presence of the chemicals and the level of them increased the probability of cancer anywhere between 30% and 80% higher.”

The study included samples from nearly 400 sea lions over 20 years. Both Field and Duignan regularly see these patients, as Field often oversees admission exams and ultrasounds while Duignan carries out the necropsies.

In the necropsies, scientists conduct a full dissection. They also look for metastasis that spread to other parts of the body, including the lymph nodes, abdominal cavity, and chest cavity.

Duignan pointed to the mammals’ breeding grounds near the Channel Islands in southern California, where toxic chemicals were dumped for years.

DDT was banned in the United States in the 1970s, and PCBs were outlawed in 1979 after being linked to cancer and other health problems.

But the chemicals made their way through the food chain and eventually into the blubber of sea lions.

Both Field and Duignan believe that the sea lions’ cancer offers a stark warning for humans.

Field said, “the strong association with the herpes virus and pollutants in the environment is a huge warning to us to pay attention to what’s happening in the oceans.”

“Knowing that there’s this presence… that makes you want to take action to improve our environment, not just for the sea lions but for ourselves as well,” Field said.