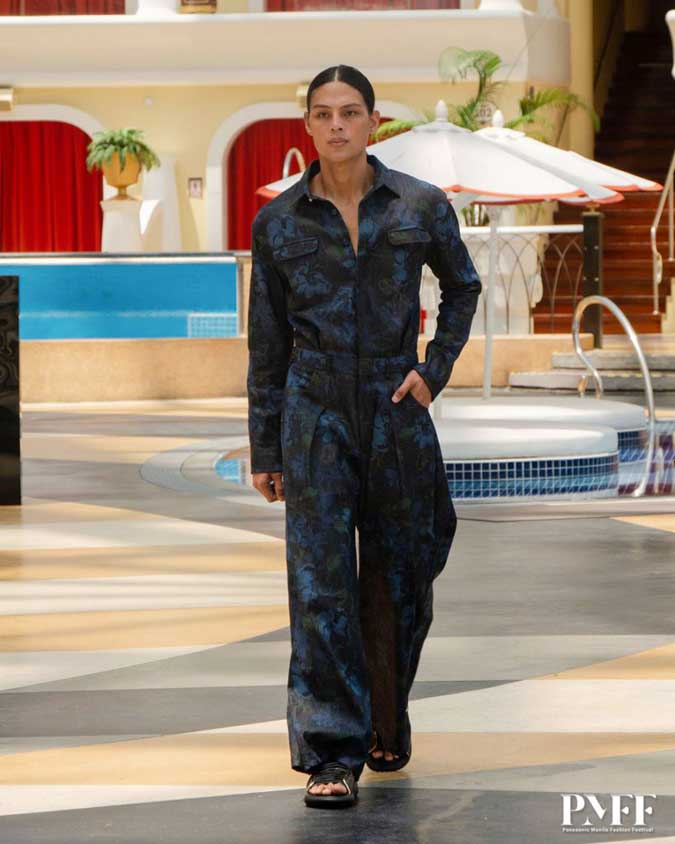 IT SHOULD be of no surprise that fashion shows and fashion itself were asleep last year, when we launched PPEs at work or lounged in pajamas at home. As society opens again slowly, we try to see what it would be like to step out again in our threads.

The Panasonic Manila Fashion Festival (PMFF) relaunched its show series last week. It had been active from 2014 to 2019, but went into slumber like the rest of the fashion world in 2020. While globally, the fashion industry had been able to stage shows in unconventional venues and platforms (Moschino’s puppet fashion show comes to mind), Manila hasn’t been able to catch up: this reporter recalls attending only two Filipino shows last year, both online: one by designer Rajo Laurel, and another through Singapore’s first virtual fashion show, streamed through thefrontrow.style, featuring Filipino talents Jojie Lloren, Paolo Raymundo, Ezra Santos, Bea Samson, and Furne Amato.

PMFF called its 12th season “A Fashion Reboot.” The title seems apt in more ways than one: PMFF used to be held by impresario Art Personas, but has since shifted management to its new organizer, Go Lifestyle Group, according to its website.

Still, the goals are the same: to bring Filipino fashion to the world (a much easier task thanks to streaming) but also collecting talents from all over the Philippines (as opposed to focusing on designers based in the capital).

Day 4 of the show series showed Bessie Besana’s collection, “Pavement,” predictably in grays. Blues were thrown into the mix, executed as a blue floral print on a black background. As for the silhouettes, there was a surprising boiler suit for men, which shows a cheerful look into a possible dystopia (or that’s just the pandemic creeping on to me).

Uniformly, across all collections in Day 4 and 5, we see a relaxed, loosened fit, which points to two factors: the youth are rediscovering the baggy styles of the late 1990s and early 2000s; but also that the relaxed styles and fits of pandemic loungewear has trickled up from sofas to runways.

Chris Diaz’s collection, “Neo Desiderium,” fights the sobriety of the first show with bright outfits trimmed with, of all things, feathers. Dexter Alazas makes a case for fun with attractive and functional pieces in what I call the new neutral — leopard print.

Some designers, however, have a bit of an out-of-touch extravagance during these times. I completely understand bright tones and trimmings, but I certainly can’t imagine huge ballgowns at a time like this; and neither the annoying tendrils of fabric extending from the shoulder and trailing on the floor, seen on the looks of at least three more designers. I can’t quite imagine anyone wanting to wear a potential safety hazard, with or without a pandemic; plus the fact that there are hardly any parties to go to and show off. I imagine a scenario where these gowns could go into the night, into a better world, and they’d still be outsized and ill-constructed.

We’re not making a case against luxury: there’s a lovely tulle dress by Mark Rancy, that, while using a questionable bubblegum color palette, has a weight and silhouette perfect for walking around your own home reminiscing about the chatter of parties.

On another note, Steph Tan’s collection, “Spill The Tea” (a play on an idiom for gossip) is perfectly polite and girlish, with a palette of pastels and details like ruffles and bell sleeves. The collection is perfect for the garden parties and weddings that have come to dominate the scene since the pandemic began.

Alodia Cecilia’s collection, meanwhile, makes a case for appropriate, sober luxury: while her palette speaks of sunshine, tones like mustard are splashed on to well-cut shift dresses beneath white coats, bubble-hemmed hoodies paired with blush-toned shorts, and, a personal favorite, hooded sweaters beaded in the baroque style, combining magisterial extravagance with functionality and comfort.

Benjie Panizales also looks towards the local with a collection called “Thrive My Tribe,” showcasing indigenous fabrics on such delightful pieces as a fire-alarm red cocoon-sleeved pantsuit.

The shows were shot at an eerily empty Okada, along walks, fountains, and pools once filled with people. The outdoor setting, at least, can be used to its full advantage, such as a moment during Mr. Panizales’ show where a gray silk vest was whipped into a frenzy by the wind, showing off multiple possibilities where the outfit might be worn. Gil Macaibay III’s collection, simply titled “Hope,” shows chili-red youthful outfits (and some mustard — must be a trend), but also these well-constructed tulle outfits.

Mavy de Leon Ladlad, with a collection romantically called “Kiss of the Silver Moon,” starts strong with a silver evening dress with a flowing cape (perhaps my earlier distaste from shoulder-based ornamentation comes from bad construction); and follows up with a line of silver evening wear for both men and women.

Here was also a familiar shade of blue — former Miss Universe and Albert Andrada really did a number by winning a pageant in that blue dress, now all one can ever think about when one sees a tall woman in royal blue is that she’s out there to win something. A model for this collection already looked like she won a prize, thanks to a blue number with a really, really big bow.