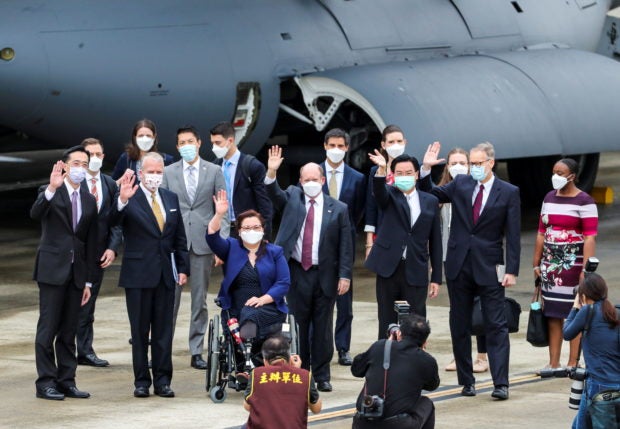 TAIPEI  – Three U.S. senators arrived in Taiwan on Sunday on a U.S. Air Force freighter and will meet President Tsai Ing-wen to discuss security and other issues, a trip that will likely irritate China.

The United States, like most countries, has no formal diplomatic ties with the island that is claimed by China, but is its most important international backer and supplier of arms.

Tsai was scheduled to meet them at the airport.

It was not immediately clear why they arrived on an air force transport aircraft and not a private jet which most U.S. officials use when visiting the island.

It is extremely rare for marked U.S. Air Force jets to land in Taiwan given the lack of diplomatic relations.

The trip comes as Taiwan is dealing with a spike in COVID-19 infections and the government is trying to speed up vaccine deliveries.

The United States said last week Taiwan would receive shots under a White House plan for the United States to share 25 million surplus COVID-19 vaccine doses with the world, though Taiwan’s share has not been announced.

Taiwan has also complained about China trying to block the island from accessing vaccines internationally, which Beijing has denied.

China routinely denounces visits of foreign officials to Taiwan, calling them an interference in the country’s internal affairs.