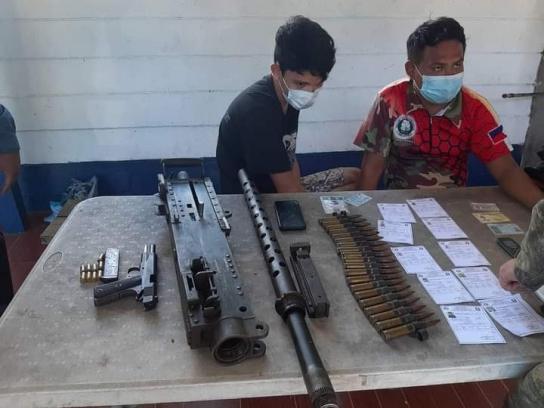 The arrested suspects with the seized firearms. (Photo from HPG-Cotabato)

KIDAPAWAN CITY—A man suspected to be a gunrunner was killed in Datu Montawal town, Maguindanao on Friday after allegedly fighting off a team of policemen.

Major Esmael Madin, chief of the Criminal Investigation and Detection Group (CIDG) in Maguindanao said that Saidali Sansaluna grabbed the pistol and shot a police officer in the butt as law enforcers served an arrest warrant against him and a certain Arman Maulana.

The policemen were out to search the house of Maulana in Bulit village at around 5 a.m. on Friday, on force of a warrant issued by the Regional Trial Court Branch 19 in Sultan Kudarat town when Sansaluna allegedly put up a fight.

Madin said that both Sansaluna and Maulana are suspected of being involved in gunrunning activities and were hunted down by police.

Madin added that some village residents tipped the law enforcers about the duo’s presence.

Madin said Patrolman John Paul Quitoriano, who was slightly injured, is now recuperating in a hospital.

In Cotabato City, members of the police’s Highway Patrol Group (HPG) arrested two men who were carrying a cal. 50 machine gun and cal. 45 pistol in a car entering the city.

The guns were discovered by a combined force of police, Marines and HPG personnel at around 10 a.m. on Friday upon inspection at a quarantine control checkpoint.

The cal. 50 machine-gun was disassembled when found inside the car.

In a report submitted by HPG-Cotabato City to HPG chief Brig. Gen. Alexander Tagum, the suspects were identified as Mohaddin Sabal Monico, 35, and Alidatu Abdul Monico, 28, both of Maguindanao.