THE Philippines saw approved foreign investments decline by nearly a third in the first quarter due to uncertainty over the coronavirus pandemic.

Preliminary data from the Philippine Statistics Authority (PSA) showed foreign investment pledges slumped by 32.9% year on year to P19.55 billion during the first three months of 2021 from P29.14 billion recorded in the same period last year.

This marked the fifth consecutive quarter of an annual decline in foreign investment pledges in the country. 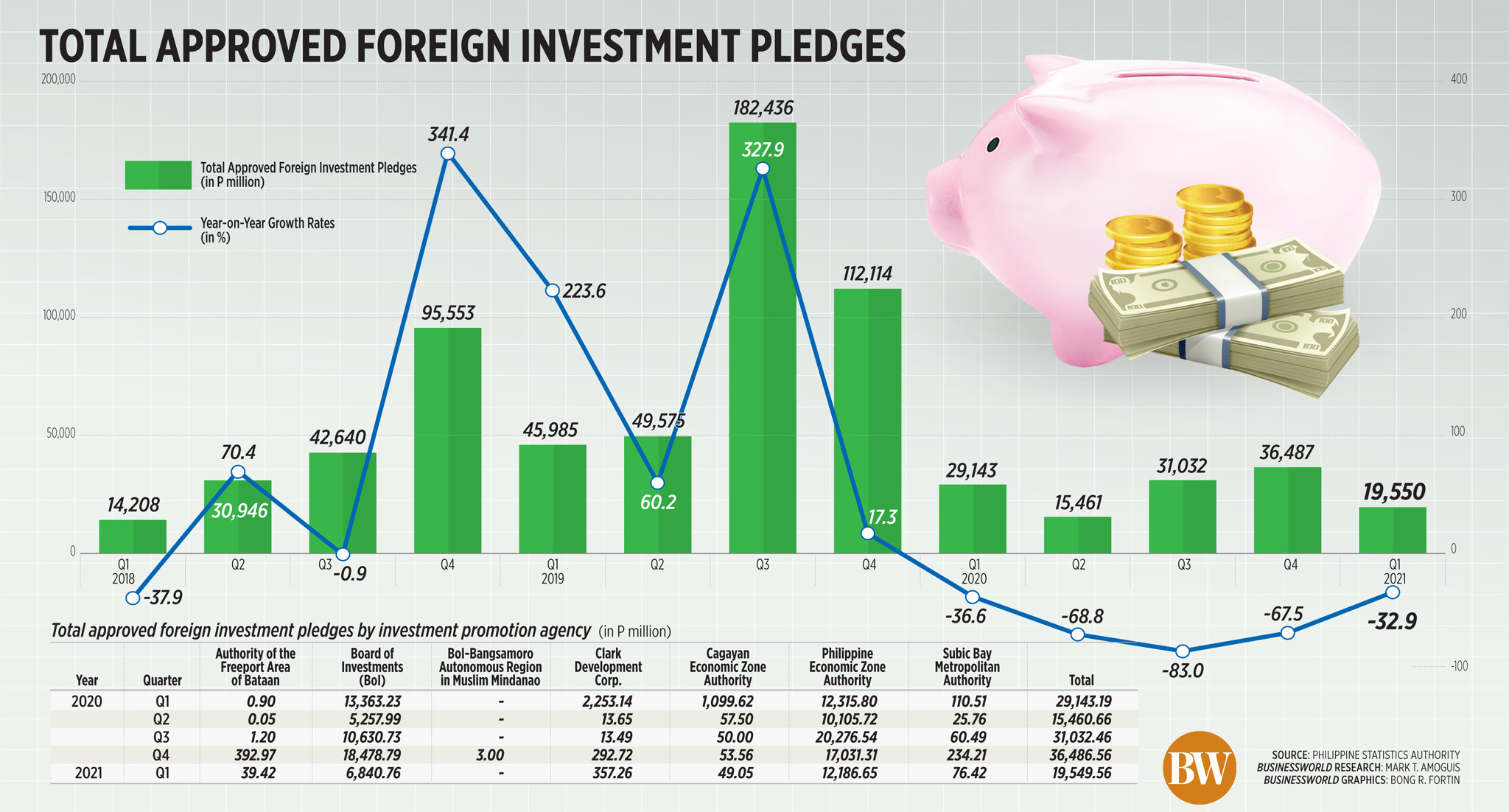 PSA data also showed the amount committed during the January to March period was the lowest level since the P15.46 billion logged in the second quarter last year, at the height of the lockdown.

Should foreign and local commitments materialize, these projects are expected to generate 23,472 jobs, 35% less than the 36,130 projected additional employment a year ago.

PSA’s foreign investment commitments differ from the actual foreign direct investments (FDI) tracked the by the Bangko Sentral ng Pilipinas for balance of payments purposes. The central bank’s monitoring also goes beyond the projects and includes other items such as reinvested earnings and lending to Philippine units via their debt instruments.

“In the midst of this pandemic, foreign investor sentiment and confidence are not only driven by macroeconomic fundamentals and institutional frameworks but also by a country’s systematic approach to managing the economic effects of the pandemic in the short, medium, and long-run to mitigate the investment risks and ensure favorable returns for investors” he said in an e-mail interview.

To recall, a fresh spike in coronavirus disease 2019 (COVID-19) was seen in March, prompting the government to tighten lockdown restrictions again.

ING Bank N.V. Manila Senior Economist Nicholas Antonio T. Mapa said economic uncertainty remains while firms are still recovering from the effects of the pandemic. Which, in turn, made investors “conserve cash before diving in headlong into a new venture.”

“Most investors generally take a medium-term view of the economy and would likely look past the recent lockdowns per se as they will likely end soon,” he said in a separate e-mail interview.

“But what the lockdowns could suggest is that the Philippine growth momentum will remain hampered in the medium term as we repeatedly need to return to tighter lockdowns when infections spike,” Mr. Mapa said.

The government counts investment pledges from seven investment promotion agencies (IPAs), which are authorized by law to grant tax and nontax incentives to investors putting up businesses or expanding existing ones in priority sectors.

The three months to March saw the PEZA contributing the most foreign investment pledges at 62.3% of the total with P12.19 billion, albeit a 1% year-on-year decline. This was followed by BoI with a 35% share valued at P6.84 billion, 48.4% less than a year ago.

Data from BoI-BARMM were not available.

sector, a huge chunk of foreign investment pledges went to manufacturing with a 57% share of the total at P11.13 billion, followed by information and communication with a 23.4% share (P4.58 billion), and real estate activities’ 11.5% share (P2.24 billion).

Year on year, foreign pledges in manufacturing grew by 11.9% from last year’s P9.95 billion. Likewise, real estate activities marginally increased by 3.7% from the first quarter of last year’s P2.16 billion. The growth rate for investments in the information and communication sector was not indicated as it exceeded over a thousand.

The Region IV-A or Calabarzon, consisting of Cavite, Laguna, Batangas, Rizal, and Quezon provinces, got the bulk of the foreign pledges at 38.6% of the total or P7.54 billion. This was more than four-fifths the commitments to the region from a year ago when it logged P5.13 billion in foreign pledges.

Central Visayas was the second-largest contributor in the total with a 14% share (P2.73 billion) in foreign pledges, followed by the National Capital Region with an 8.9% share (P1.74 billion).

In terms of country investors, Japan was the biggest source of FDI commitments in the first quarter with P10.72 billion, 8.4 times greater than a year ago and accounting for 54.8% of the total. It was followed by the Cayman Islands and South Korea, pledging P1.14 billion (5.8% share) and P592.63 million (3% share), respectively.

As for the second quarter outlook, Mr. Rivera said investors remain “risk averse” due to the apprehensions over the handling of the pandemic.

“The Philippines needs to project and prove that it is efficiently managing the pandemic by swiftly inoculating the population so the economy can be reopened safely,” Mr. Rivera added.

For Mr. Mapa, foreign investment pledges would likely “remain subdued” as investors are left with conserving cash or in the search for other destinations.

“Given that we have lost our previous most compelling factor to attract investment: our strong growth trajectory,” Mr. Mapa said.

The Philippine economy shrank by 4.2% in the first quarter. Economic managers expect gross domestic product to grow by 6-7% this year.