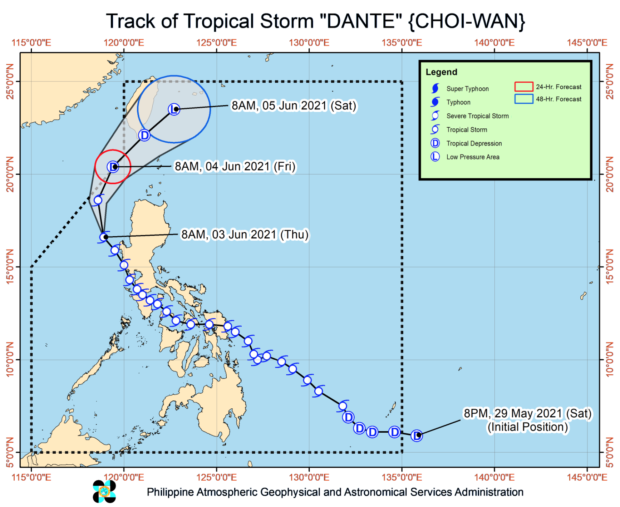 MANILA, Philippines — Tropical Storm Dante’s cost of damage to public infrastructure as of Thursday morning was estimated to be around P268.5 million, the Department of Public Works and Highways (DPWH) said.

According to DPWH’s assessment, a huge chunk of the damage was inside Soccsksargen and Central Visayas, which were estimated to be around P162.3 million and P106.2 million, respectively.

DPWH Secretary Mark Villar assured the public that the department is doing everything to clear the roads, with 270 equipment assets and 1,569 workers deployed for the on-going clearing activities.

“As of 6:00 AM Thursday, June 3, 2012, the Department of Public Works and Highways (DPWH) estimates at least P268.52 Million damage of Tropical Storm Dante in national roads and flood-control structures,” DPWH said in a statement posted on their Facebook page.

Here are the affected roads that DPWH is currently clearing:

Before moving over to the western side of the country, over the West Philippine Sea, Dante brought strong winds and rains over the eastern portion, particularly Caraga Region and Western Visayas.

It eventually crossed Western Visayas before moving north of Central Visayas, and then over Southern Luzon.

As of Thursday afternoon, Dante was seen 255 kilometers west of Sinait, Ilocos Sur, packing maximum sustained winds of 65 kilometers per hour (kph) and gusts of up to 90 kph.

Due to its movement, Dante is seen to temporarily leave the northwestern border of the Philippine area of responsibility (PAR) by Thursday night, and then re-enter by Friday evening.

However, the cyclone is expected to weaken to a tropical depression upon its re-entry.

12 areas now under Signal No. 2 as Dante moves northwest