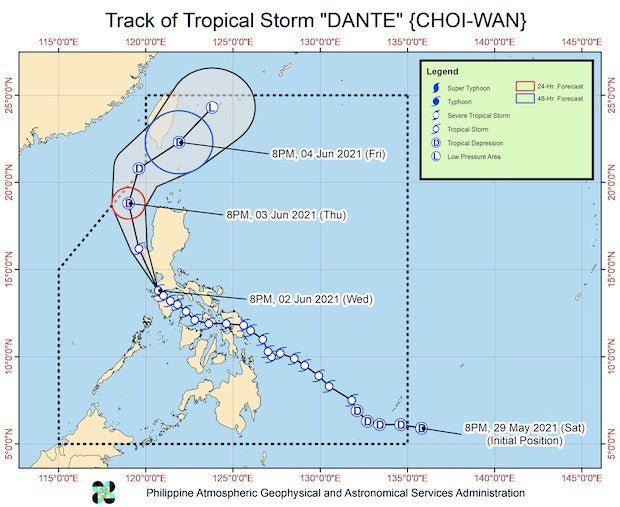 MANILA, Philippines — Tropical Storm Dante appeared to be headed towards Bataan and Zambales after making landfall over southern towns in Batangas, according to the Wednesday night severe weather bulletin of the Philippine Atmospheric, Geophysical and Astronomical Services Administration (Pagasa).

Dante was last seen over the coastal waters of Nasugbu in Batangas. It maintained its strength, blowing maximum sustained winds of 65 kph near the center with gustiness of up to 90 kph.

Moving northwest at 15 kph, the storm expected to turn north-northwest before making landfall either in the vicinity of the Bataan Peninsula or the southern tip of Zambales in the next three to six hours, Pagasa said.

It was predicted to emerge over the West Philippine Sea off the western coast of Pangasinan on Thursday morning.

Pagasa also said that it made two more landfalls over Batangas on Wednesday night — over Tingloy in the Maricaban Islands at 7:20 p.m, and over Calatagan at 8:00 p.m.

As of Wednesday night, Tropical Cyclone Wind Signal No. 2 was still raised over the following areas:

The following areas were put under Signal No. 1:

• the rest of Bulacan

• the rest of Pampanga

• the rest of Tarlac

• the rest of Pangasinan

Strong to gale-force winds are still possible over the areas under Signal No. 2, which may cause light to moderate damage to structures and vegetation.

Strong breezes to near-gale force winds may be expected in areas under Signal No. 1

Even after hitting Bataan’s mountainous areas, Dante was still expected to remain a tropical storm when it moves over the coastal areas of Agno in Pangasinan by Thursday morning.

But by Thursday night, as it moves to 180 km west-northwest of Laoag City in Ilocos Norte, Dante may weaken into a tropical depression.

It may then move to 235 km west of Itbayat, Batanes, on Friday morning, well outside the Philippine area of responsibility (PAR).

Pagasa is not discounting the possibility that Dante may weaken after crossing Bataan.

Pagasa warned that scattered and significant rainfall may lead to flash floods and landslides, especially in hazard areas like low-lying lands and those near mountain slopes.