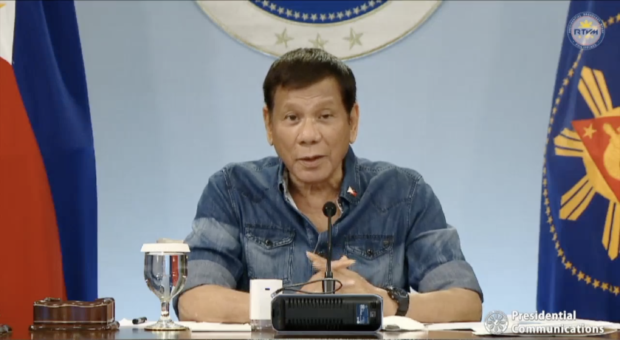 MANILA, Philippines — “Would I last long? Let’s be frank here. Will I last long in this [CURSING] post if I’m inutile? Would the military allow me to govern if that’s how I run things — without me doing anything?”

President Rodrigo Duterte said this, speaking in Filipino, in his pre-recorded press briefing on Monday, directing the statement at his critics, particularly members of the opposition who questioned his absence from the public eye for almost two weeks while the country was grappling with a COVID-19 surge.

As of Monday, the Philippines recorded over 150,000 active COVID-19 cases, even as Metro Manila, Bulacan, Cavite, Laguna, and Rizal remained under a modified enhanced community quarantine (MECQ).

The chief executive also had some strong words for people who wished him ill — focusing on staunch critic and opposition Sen. Leila de Lima — as they speculated that he was in bad shape, which was probably the reason he canceled his public address twice in the same week.

Earlier in the briefing, Duterte said that he intentionally kept away from public view, comparing himself to a child playing a trick on naysayers.

“You know, that’s not very nice when you pretend to be gleeful – happy,” he said in Filipino, referring to De Lima, who remains in detention on drug-related charges. “I said to myself: Just go on. Anyway, you suffered, while we’re enjoying the times of our lives here — singing sometimes. Singing, laughing.”

“You’re in prison. Bear it. [CURSING], you really did it. Don’t say you didn’t do it,” he went on, referring to De Lima’s being accused of being involved in the illegal drug trade.

Duterte’s health has become the focus of discussions again, as his usual Monday address was rescheduled for  Wednesday — only to be canceled again.

Go showed several photos of the president supposedly in Malacañang, the most recent of which showed Duterte riding a motorcycle and playing golf.

According to presidential spokesperson Harry Roque, Duterte canceled his address merely as a precautionary measure because several officers from the Presidential Security Group had tested positive for COVID-19.

Earlier, Roque also stressed that there was no need to release a medical bulletin on Duterte, saying that he was not sick.

Duterte’s health has been often discussed after he assumed office in 2016 as the oldest president ever elected in the country’s history.

He admitted on some occasions that he had several lingering medical conditions — like Buerger’s disease and Barrett’s esophagus — aside from experiencing occasional headaches and spinal issues due to a motorcycle accident.