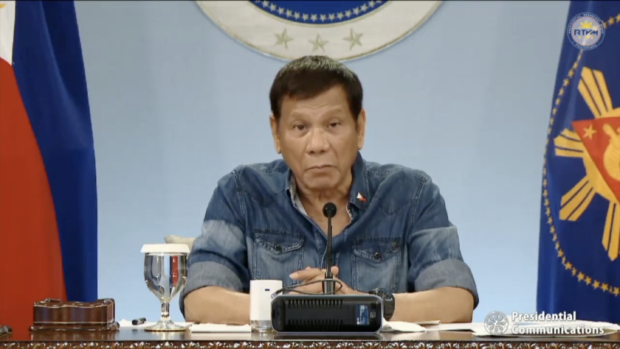 A screengrab from RTVM’s Facebook page shows President Rodrigo Duterte during his “Talk to the People”, a pre-taped national address aired on television on Monday night, April 12, 2021 – two weeks after being absent from the public eye.

MANILA, Philippines — President Rodrigo Duterte on Monday night assured the public that he can still exercise his duties as the country’s chief executive because he has no illness that could stop him from doing so.

He made the remark amid speculations about his health condition, which surfaced due to his long absence from the public view after canceling his regular public address twice last week.

“Kung sabihin mo na may sakit ako ngayon that could prevent me from exercising the powers of the presidency, wala ho,” he said during his pre-taped regular public address “Talk to the People” that was aired on national television around 9:30 p.m. Monday.

(If you say that I have an ailment now that could prevent me from exercising the powers of the presidency, I have none.)

(That’s why I still could swing golf and ride a motorcycle because I still can.)

Early Sunday morning, Duterte’s long-time assistant who is now a lawmaker, Senator Christopher “Bong” Go, posted photos and videos of the President jogging, motorcycle-riding, and golfing at the Malacañang grounds in a bid to quell rumors about Duterte’s supposedly deteriorating health.