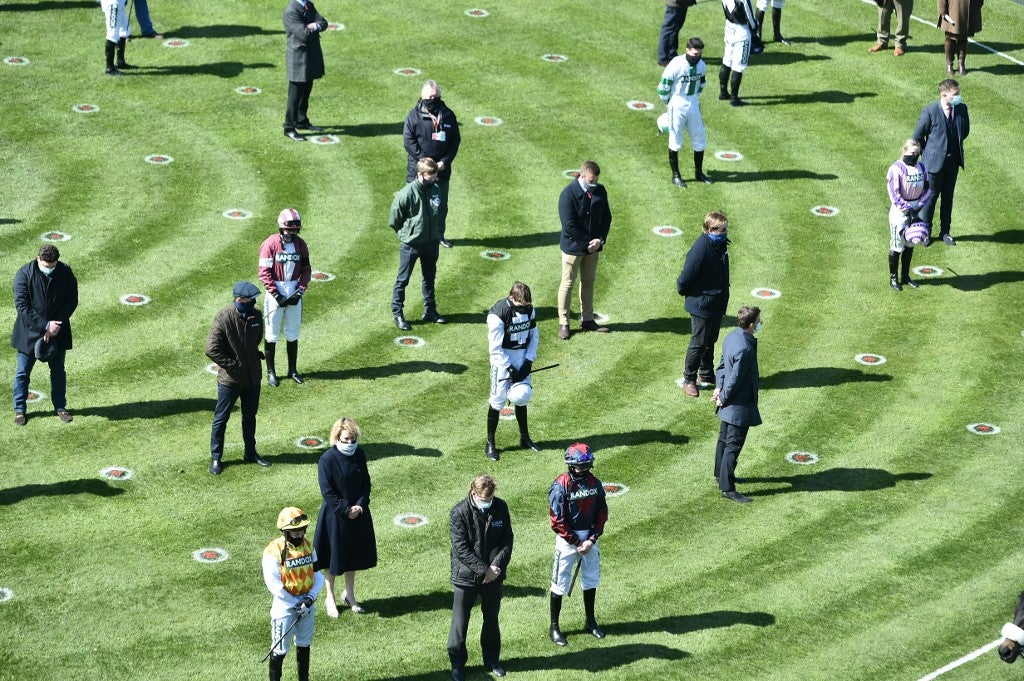 Jockeys and trainers stand for a minutes silence following the announcement of Britain’s Prince Philip, Duke of Edinburgh death at the Grand National Festival at Aintree Racecourse in Liverpool, north west England on April 9, 2021. (Photo by PETER POWELL / POOL / AFP)

Racing’s Scottish Grand National, as well as football and rugby fixtures in the United Kingdom, are to be moved “as a mark of respect” to avoid a clash with the funeral of Prince Philip on Saturday.

Scotland’s premier jumps race will be run on Sunday while 32 English Football League games will be moved from their 1400GMT kick-off slot.

Prince Philip’s funeral is due to begin at 1400GMT, and a national minute’s silence will be held at the same time.

“As a mark of respect for the funeral ceremony of His Royal Highness Prince Philip, Duke of Edinburgh, it has been agreed that no racing will take place in Great Britain between 2:45 p.m. and 4:15 p.m. on Saturday 17 April,” said the British Horseracing Authority (BHA) in a statement.

“As a result, the Scottish Grand National fixture at Ayr and the Spring Trials fixture at Newbury will now be moved from Saturday 17 to the afternoon of Sunday 18 April.”

The English Football League said it “will now work with its clubs to determine at what time the matches will be played”.

In the Premier League, there are talks about moving Wolverhampton Wanderers’ home game against Sheffield United which is due to get underway at 1400GMT.

In cricket, the nine County Championship matches scheduled on Saturday will be paused between 1350 and 1510GMT.

The England and Wales Cricket Board (ECB) has also asked all recreational cricket clubs to do the same.

In Scotland, there are six Scottish Cup fourth-round matches scheduled around the time of the funeral, including the high-octane clash between Rangers and holders Celtic at 1500GMT.

The Scottish Football Association says it has “entered dialogue with the relevant stakeholders” regarding those fixtures.

The FA Cup semi-final between Chelsea and Manchester City at Wembley is at 1630GMT.

Premiership Rugby has changed the kick-off times of all four of its matches on Saturday so they do not clash with the funeral.