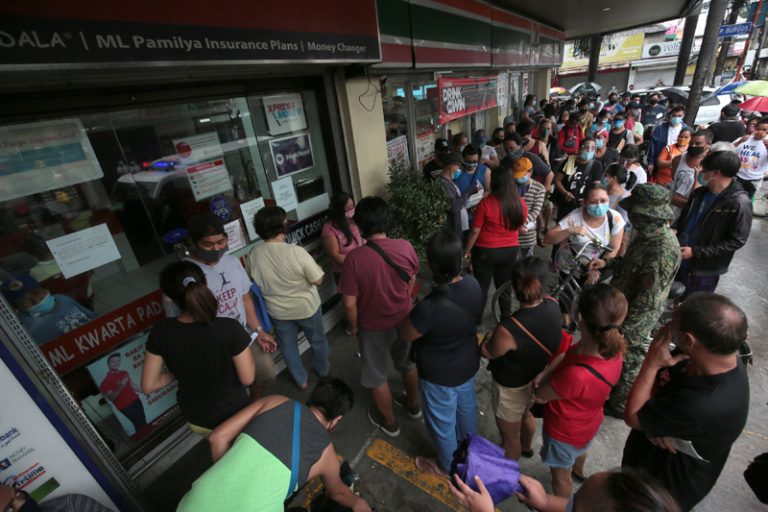 BOTH employers and employees on Sunday said another week of a strict lockdown in the Philippine capital and nearby provinces will be difficult if no aid will be given to affected sectors, adding restrictive measures cost billions to the economy daily. “You’re looking at business from bad to worse, even in confidence in business,” Employers Confederation of the Philippines President Sergio R.Ortiz-Luis said in an interview with BusinessWorld on Sunday. With the strictest quarantine level enforced in the past two weeks, “People are already losing money,” he said. “There is also not enough aid being given,” he added in Filipino. Mr. Ortiz-Luis added lockdowns are not sustainable and the government should instead focus on other means to control the virus. The stringent quarantine measures cover Metro Manila, Bulacan, Cavite, Laguna, and Rizal, which is collectively now referred to as the NCR (National Capital Region) Plus area. Meanwhile, Associated Labor Unions-Trade Union Congress of the Philippines Spokesperson Alan A. Tanjusay said in a statement that affected workers in the NCR Plus area will experience more difficulties if there is no additional government subsidy. “Without a quick and adequate additional cash assistance and food dole outs to get them by another week of government-imposed ECQ (enhanced community quarantine) lockdown, it is very difficult for the government to keep them at home for another seven days,” he said. — Gillian M. Cortez

THE government’s inter-agency group on anti-trafficking recorded a 117% increase in convictions of child sexual offenders online to 100 in 2020 from 46 the previous year. Justice Undersecretary Emmeline Aglipay-Villar released data to reporters on Sunday showing the convictions in 2020 involved 34 human trafficking cases and 66 from other related laws, which include child abuse, child pornography, and photo and video voyeurism. Ms. Aglipay-Villar said the Department of Justice’s Inter-Agency Council Against Trafficking intensified its operations in 2020 following reports that cases of online sexual exploitation of children increased during the lockdown period. She also said the anti-trafficking task force has increased its manpower, which means there are now more prosecutors handling child exploitation cases. The council also works closely with the Philippine Internet Crimes Against Children Center and civil society organizations. — Bianca Angelica D. Añago

SENATE Minority Leader Franklin M. Drilon said there should be transparency in the pork importation process to allay suspicions that the government’s decision to ease restrictions is marred with corruption. “If there is transparency, we can avoid people thinking that there is anomaly here again,” he said in Filipino in an interview over DZBB on Sunday. He said the list of importers and where the pork will come from should be released. The Senate committee of the whole will hold a hearing Monday on food security, including the alleged corruption through padded costs in the importation of pork. President Rodrigo R. Duterte last week signed an order easing pork importation rules to help address supply shortage caused by the African Swine Fever (ASF) outbreaks since mid-2019 and minimize inflation. The Senate earlier asked the President to reject the recommendation of the Agriculture department to lower the tariff rates and increase the minimum access volume of imported products. The Senate last month also adopted a resolution urging Mr. Duterte to declare a state of national calamity due to the ASF impact on the swine industry. — Vann Marlo M. Villegas