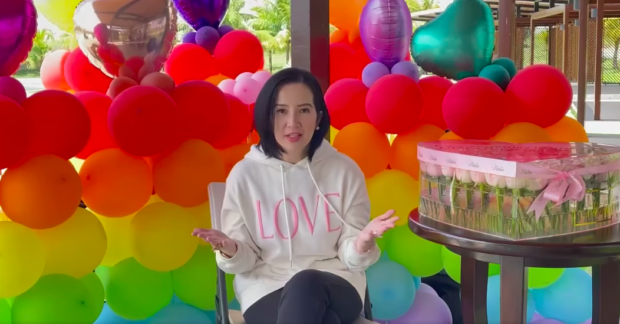 Kris Aquino is going to start limiting her sons’ appearances on her online platforms and will only be showing what “regular people” show on social media.

She said she wants to do this to give her children, Josh and Bimby, “enough privacy,” as stated in her Facebook video last Friday, April 9. She also took responsibility for the bashing that her sons experienced in recent weeks.

“I’m partly to blame kung nadamay man ang mga anak ko (if my children were affected). I can never shield them fully because from the time they were born, I was already Kris but I can choose what I can show you,” she said.

She added that she began to observe what “regular people” show on their social media pages because she plans to do the same.

“They post birthdays. They post trips. They post ‘pag nag-graduate ang mga anak (when their children graduate). They post milestone moments. So that’s the decision I made, ‘yon ang ipapakita ko sa inyo (that is what I will be showing you),” she stated.

i missed you like crazy… kaya may SURPRISE. please watch the whole video? #lovelovelove 🌈

Aquino stressed that she will not be hiding her sons from the public but will be giving them “enough privacy,” just like any other parent who show glimpses of their children’s lives on social media.

“You will still see them dun sa mga events na mga regular na tao. ‘Yon ang mga nilalabas nila e so nire-review ko. They will have enough privacy but you cannot see them as often as you used to,” Aquino said.

(You will still see them in events like those of regular people. That is what other people are putting out, so I reviewed it. They will have enough privacy but you will not be able see them as often as you used to.)

Aquino is noticeably calmer than she was during her tell-all video last month, where she revealed that she tried reconnecting with former Quezon City mayor Herbert Bautista and pleaded with supporters of President Duterte to stop bashing her. She also stated early last month that she is considering moving to Tarlac after hateful remarks were said about her sons online. JB