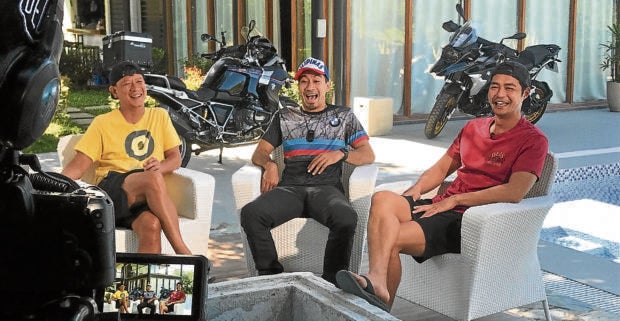 For actor Zanjoe Marudo, who succeeded in fighting COVID-19 in September 2020, more than the physical battle with the virus, it was really the mental anguish that got to him.

Zanjoe admitted that it was at this time since the pandemic began over a year ago that he felt really down. “I was all by myself for 14 days. I had to isolate myself at home. I didn’t really feel anything bad physically, but mentally, I was confused. I couldn’t understand what was happening to me. I felt strong enough to do this or that, but I wasn’t allowed to do so,” he recalled to Inquirer Entertainment in an exclusive Zoom chat.

Zanjoe said it was possible that he got infected while at work. He also said that luckily, no other family member or loved-one got the virus from him because they live in different houses. The actor, however, said he has learned a lot from the experience. He explained: “Since I wasn’t really feeling anything bad, it was the mental struggle that got to me. You see, if I was feeling weak or sickly, then I wouldn’t have felt so confused. In my mind, I was very much aware that something is not right with me.”

This was why he believes that the vaccine for COVID-19 should be made readily available to everyone, especially those who couldn’t afford it.

“Just the other day, I was watching the finals of a golf tournament. I noticed that they’ve already allowed people to physically watch the games. Some of the golfers and caddies weren’t wearing any masks anymore, too. I said, ‘things are going back to normal for them.’ I think that’s the only solution for us to be able to move freely again,” Zanjoe said. He added that getting vaccinated is important, “in order for us to feel secure, knowing that we’re already protected from the virus. I also hope that the government will be able to provide for those who are struggling financially. While, yes, people like us will no longer line up for the vaccines so that more from the less privileged get to avail of them, we still don’t know how to get hold of them for ourselves.” This interview with Inquirer Entertainment was to promote Zanjoe’s YouTube channel, “D’ LaZY Road Trip,” which also features his friends, basketball star LA Tenorio and comedian Yubs Azarcon.

We asked LA and Yubs the same questions. LA, who is married and has four kids, said he is currently researching whether or not their children should get vaccinated. “For now, since they aren’t allowed to go out of the house, anyway, we are foregoing it. My wife and I will definitely get immunized,” the basketball star declared.

He explained that since basketball is a contact sport, players are required to take the vaccine. “It’s the only way for us to finally resume work,” he pointed out. “In the NBA, for example, they recently let people in at the Staples Center to watch the games. Sixty percent of the venue had already been filled up. That’s already a big deal if we want to jump-start this industry. For that to happen, everyone should get vaccinated.”Yubs said the current global health crisis made him feel “worried.” He said the eventual shutdown of his home network, ABS-CBN, also added to his agony. “Things changed when Z (Zanjoe’s nickname) invited me to stay with him here in Batangas. I also brought my wife with me,” said Yubs. “I finally felt safe. I’m also feeling a lot more cheerful now because I’m in the company of a good friend.”Yubs said he also felt positive with the news that networks have joined forces as a result of the shutdown. Despite their lack of access to free TV, ABS-CBN shows can now be seen on TV5 and A2Z.

“I hope this continues. Before this network war became a thing, I remember [the late] Direk Al Quinn working for all the channels seven days a week. I wish we could experience that again. This will also give us a chance to meet and, eventually, collaborate with talents from other networks,” he said. While the pandemic has caused uncertainty, it has also created a more level playing field for artists like them. Hence, their “D’ LaZY Road Trip” vlog; with the word “LaZY” being the combination of the initials of the three men.

“The three of us are bike enthusiasts way back before the pandemic. We started by riding Vespas, and later on upgraded to bikes in order for us to travel further,” said Zanjoe. “This later became part of our lifestyle. Traveling using big bikes is really a different experience.”

With the pandemic lockdown, the boys couldn’t ride for leisure. Instead, Zanjoe resorted to watching the TV series “Long Way Round,” that documented the journey of British actors Ewan McGregor and Charley Boorman from London to New York City on motorcycles. “I showed it to LA. When the lockdown eased up a little and protocols became less strict, we started doing this vlog,” he added.

“Apart from us riding motorcycles, you will see how we are like as friends in this show,” added Yubs. “Second, you will get to experience virtually places that Pinoys don’t normally go to or are still unfamiliar with. We will show you how beautiful the Philippines is as we see it.” Their YouTube channel already has 15,000 subscribers even before the launch of the first episode. During its first season, the channel will feature their journey from Tanauan, Batangas, where Zanjoe was born and raised, to Nasugbu, where LA grew up. “We went to four different towns. As shown in the teaser, we went free diving in Mabini,” said Zanjoe. INQ