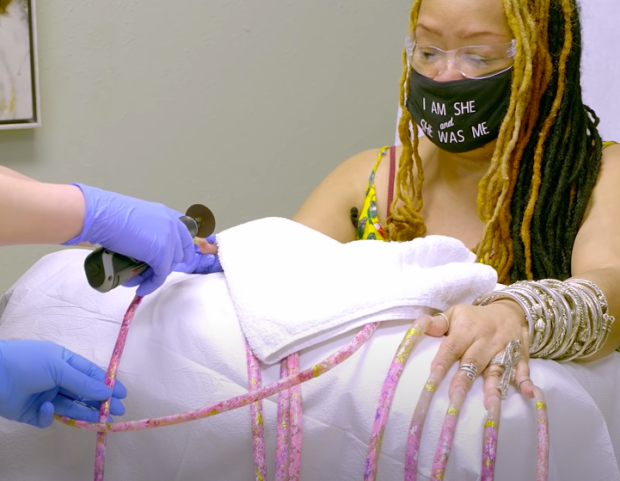 Ayanna Williams, who holds the record of having the longest fingernails, finally has them cut. Image: screengrab from YouTube/Guinness World Records

Ayanna Williams, the woman who holds the Guinness World Record for having the longest fingernails, has had them cut finally after almost 30 years.

Williams, of Texas, USA, started holding the record for the “longest fingernails on a pair of hands (female)” in 2017, according to Guinness.

To put things into perspective, at her nails’ latest length Williams needed around three to four bottles of nail polish and a few days to do her manicure.

Williams had her nails cut just this past weekend under the care of Dr. Allison Readinger of Trinity Vista Dermatology in Forth Worth, Texas.

Guinness World Records, in coordination with “Ripley’s Believe It Or Not!,” released the video of Williams’ journey of letting go of her nails via YouTube on April 7.

Despite letting go of her record-holding nails, Williams noted: “I’m gonna always be the queen that I am with or without my nails. Because my nails don’t make me, I make my nails.”

After being asked by a nurse why she was having her nails cut, Williams simply replied that she was “just about tired of them, so it’s time for them to go.”

In the video, the doctor can be seen using an electric rotary tool to safely remove Williams’ thick and long fingernails, which were adorned with purple and gold nail polish.

While admitting that she was emotional over losing her nails after so long, Williams said that she felt “a lot of relief” immediately after the procedure.

When asked if she would encourage anyone else to grow their nails too, Williams said yes with no hesitation.

“Absolutely! Do what you wanna do. Let everybody be themselves. If you wanna grow your nails long, do it, why not!” she stressed.

“It’s your life, do it! The main thing is don’t worry about what people say because people are gonna talk at the end of the day — if you’re doing good, if you’re doing bad,” Williams added.

Williams’ nails have been preserved and will now be on display at Ripley’s Believe It Or Not! Museum in Orlando, Florida, according to Guinness.  /ra