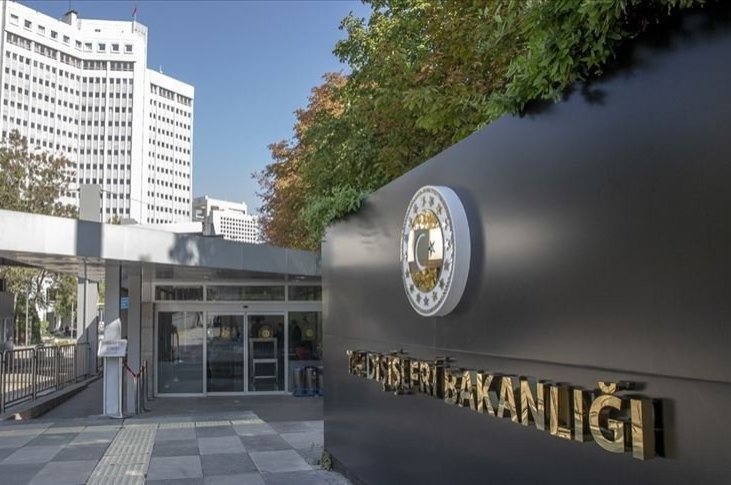 The 2020 Turkey report on Human Rights Practices published recently by the U.S. State Department has once again been based on unaccredited claims and is far from objective, containing baseless allegations and biased comments, the Turkish Foreign Ministry stated Wednesday.

The ministry, in a written statement, also criticized that the Gülenist Terror Group (FETÖ), responsible for a failed 2016 coup and the death of hundreds in Turkey, was again cited in the report as the so-called “Gülen Movement.”

Claims on Turkey’s operations against terrorism in Syria are “unacceptable,” the ministry stated, adding that the terrorist activities against the Syrians by the PKK and its Syrian wing the YPG were not mentioned in the report.

Reiterating that Turkey is decisive in preserving and enhancing human rights, the ministry said that the recently announced human rights action plan and judicial reform strategy is a clear indication of this.

“Turkey will continue its efforts to preserve and enhance not only the rights of its own citizens, but also those of millions of people it is hosting, on the basis of democracy and the rule of law,” it concluded.

Turkey earlier this month announced its new action plan on human rights, which has 11 main principles set to be carried out over the course of two years.

The new action plan is a step in its reform journey that the ruling Justice and Development Party (AK Party) has been carrying out continuously and uninterruptedly since the day it was founded in 2001.

Initially mentioned during the announcement of the first Judicial Reform Package, the plan is based on the vision of “Free Individuals, Strong Society: A More Democratic Turkey.” Its motto, however, is, “Let people live so the state will live!” The plan originates from the state’s “obligation to protect, in all of its affairs and acts and with all of its state institutions and organizations, the physical and moral integrity, and the honor and dignity of individuals.”

Around the 11 main principles that constitute the backbone of the plan, a total of nine aims, 50 goals and 393 activities have been set. The activities envisioned within the framework of each goal under the relevant aims are organized as tangible “measurable and monitorable” actions.

The plan focuses on the topics of freedom, the right to security, the right to a fair trial, freedom of speech, as well as, the rights of women and the disabled. The enhancement of these rights and liberties has seen setbacks in the bureaucracy that have prevented them from being implemented properly. The plan has been prepared in accordance with the observations and reports of international mechanisms that monitor human rights in cooperation with several human rights groups.

Some of the other principles of the plan are human dignity – as the essence of all rights; being under the active protection of the law; the equal, impartial and honest provision of public services to everyone; strengthening of the rule of law in all areas as a safeguard for rights and freedoms and nobody being deprived of liberty due to criticism or expression of thought.

The nine aims of the plan are designed to provide a stronger system for the protection of human rights; strengthening judicial independence and the right to a fair trial; legal predictability and transparency; protection and promotion of the freedoms of expression, association and religion; strengthening personal liberties and security; safeguarding physical and moral integrity and the private life of the individual; more effective protection of the right to property; protecting vulnerable groups and strengthening social wealth; and lastly but in no means less important, the high-level administrative and social awareness on human rights.