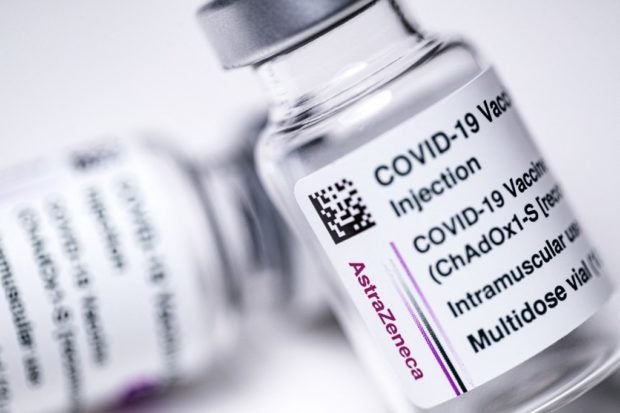 (FILES) In this file photo taken on March 11, 2021 This picture shows vials of the AstraZeneca Covid-19 vaccine in Paris. (Photo by JOEL SAGET / AFP)

PARIS — France on Friday said under 55s who received a first injection of the AstraZeneca COVID-19 vaccine should be given a jab from a different producer for their second dose, a ruling affecting more than 500,000 people.

France’s national health authority HAS last month said the AstraZeneca vaccine should only be given to those aged 55 and over because of reports of potentially deadly blood clots in a very small number of those younger people vaccinated.

Officials in France initially said that those given the AstraZeneca jab in a first dose should go ahead with the second jab even if aged under 55.

But the HAS said that those aged under 55 who had been given the AstraZenaca as their first dose would now get the Pfizer-BioNTech or Moderna vaccine as their second course.

France has been injecting health workers as a priority group meaning that many younger people have already received the AstraZeneca jab.

They include Health Minister Olivier Veran, a neurologist aged 41, who was given the AstraZeneca vaccine live on television on February 8.

“It is completely consistent to say that we do not recommend the AstraZeneca vaccine to people under 55 years of age while we learn more,” the minister told RTL.

“Therefore, if you have received a first injection and are under 55 years old, you will be offered another vaccine 12 weeks after the first injection.”

‘Records to be broken’

Europe’s medicines regulator said this week the AstraZeneca vaccine could cause very rare blood clots among some recipients, prompting several countries to scale up restrictions on the jab.

Several clinical trials are looking at the efficacy of combining two types of vaccine.

“Based on previous studies which combine different vaccine types, a combination of the AZ and Pfizer vaccines is likely to be safe but it’s important that this is tested in the context of a clinical vaccine trial,” said Helen Fletcher, professor of Immunology at the London School of Hygiene and Tropical Medicine.

The WHO currently recommends the same product be used for both doses but has said further research should be carried out on the interchangeability of vaccines in so-called “mix and match” strategies.

After a sluggish start, France’s vaccine campaign is now gaining pace and Prime Minister Jean Castex said Thursday over 10 million people in the country had now received at least their first dose.

Veran said a record 437,000 people had been injected in France on Thursday alone. “Records are made to be broken and we will go beyond that in the next days,” he said.