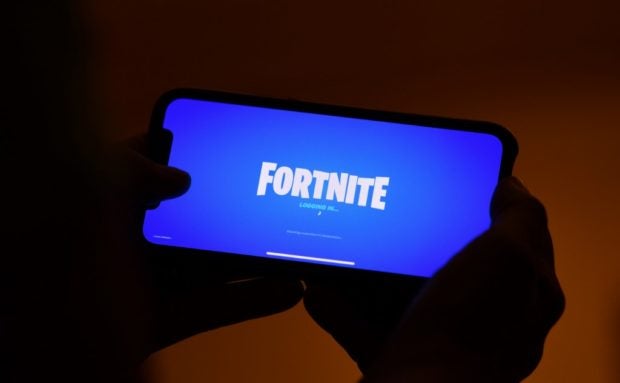 This illustration picture shows a person logging into Epic Games’ Fortnite on their smartphone in Los Angeles on August 14, 2020. (Photo by Chris DELMAS / AFP)

SAN FRANCISCO — Epic Games and Apple dueled on Thursday in legal filings ahead of a trial over whether to break the iPhone maker’s tight grip on the App Store.

Epic, the maker of the massively popular Fortnite game, accused Apple of trapping people in its mobile device world and collecting “outsized commission” at the App Store that serves as the only source of digital content.

Apple countered that it has no monopoly when it comes to digital games and that the suit is part of an effort by Epic to portray “Apple as the ‘bad guy’ so that it can revive flagging interest in Fortnite.”

Apple pulled Fortnite from its App Store in August of last year after Epic released an update that dodges revenue sharing with the iPhone maker, and the companies are now locked in a legal battle.

A trial in the case is set to begin May 3 in US federal court near San Francisco.

Apple chief Tim Cook as well as Epic founder and top executive Tim Sweeney are among those expected to testify.

“Apple constructed the iOS ecosystem, using a combination of technical and contractual means, to restrict distribution of iOS apps, foreclosing competition, harming the competitive process, and harming consumers,” Epic contended in a filing.

The App Store is home to more than 1.8 million apps worldwide, generating billions of dollars in revenue for developers since it was launched in 2008.

Apple’s commission on App Store transactions ranges from 15 percent to 30 percent, and the online shop has been part of the Silicon Valley titan’s effort to ramp up revenue from digital content and services.

Epic has called the App Store bite of transactions an “Apple Tax” and contended that the vetting of apps there is “cursory.”

Apple maintains that the commission is standard for the market, and is warranted given the company’s investments in security, privacy, and innovation.

It has argued that Epic “would like to reap the benefits of the App Store without paying anything for them.”

Apple said Epic has benefitted from the iOS ecosystem with some 130 million downloads in 174 countries, which earned Epic more than half a billion dollars, before changing its tune and seeking “special treatment.”

The dispute comes with Apple and other tech giants facing increased scrutiny for their dominance in various economic sectors, allowing them to grow even as much of the economy contracts from the impact of the coronavirus pandemic.