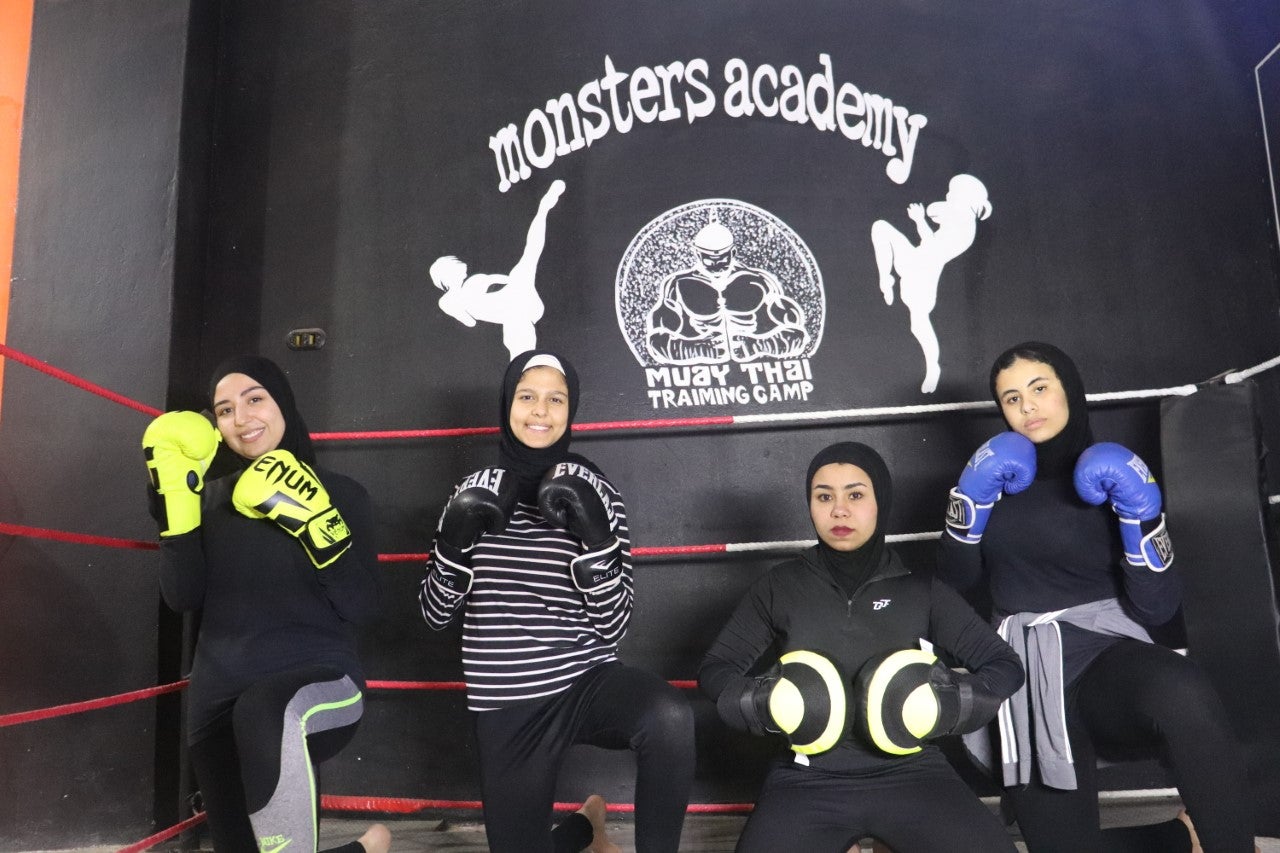 A group of Muay Thai female players pose for a photo inside the Monsters Academy in Abu Zaabal area, Qalubiya governorate on April 1, 2021.

Ahmed, known to everyone as Coach Samah, started learning Thai boxing, or Muay Thai, five years ago after being sexually harassed, and now teaches the martial art to about 40 people, mostly women and girls, at her own training camp.

“Muay Thai turns every part of your body into a weapon: your elbows, your knees, your fists and even your chin,” Ahmed told the Thomson Reuters Foundation from her one-year-old academy in Abu Zaabal, about 30 km northeast of Cairo, the capital city.

“Girls will not need to hold weapons to defend themselves. They can use their bodies as defense,” she said, adding that she named it Monsters Academy because it takes the courage and the power of a monster to learn Thai boxing.

Debate over sexual harassment is growing in the socially conservative country, where women regularly face offensive comments, stares and groping on crowded public transport, which can deter them from traveling for work or education.

A 2017 Thomson Reuters Foundation poll found Cairo to be the most dangerous megacity for women, and a United Nations’ survey in 2013 found that 99% of women had experienced sexual harassment in Egypt, where women have long felt disadvantaged.

Ahmed’s parents initially refused to let her train, saying martial arts were only for men.

“I insisted on learning it and even teaching other girls,” she said, standing in front of a black wall painted with white silhouettes of women performing high kicks and photographs of other Muay Thai fighters in the ring.

Many young Egyptian women like Ahmed are pushing for change, with hundreds speaking out about sexual assault on social media, echoing the 2017 #MeToo campaign in the United States.

The young fighters at the academy say that it is important for them to feel safe to live fully and move around freely.

Only 26% of women in Egypt, compared to 79% of men, participate in the labour force, according to the 2015 Global Gender Gap Index, which ranked the north African country at 136 out of 145 countries for gender equity.

Psychologists say female role models in sport, like Ahmed, are valuable for women and girls because they provide evidence that success is attainable and counteract negative gender stereotypes about them as a weaker sex.

This can boost self-confidence, create a sense of control over their own bodies and motivate them to be more independent, researchers at Canada’s University of Toronto found this year.

“I believe that it is a basic right for girls to play any sports they want, and also it is very important for them to be able defend themselves against any assaults,” said Ahmed, who raised money from friends and family to open the academy.

“It is really getting famous, especially in our area.”

Malak Ahmed, 17, has trained with Coach Samah for two years and is one of her teaching assistants.

“It is not safe here and learning a self-defense sport like Muay Thai can help many women protect themselves against sexual harassment or any kind of violence,” she said, adding that she now walks the streets more confidently and feels safer.

“I can go to my school without worrying about getting sexually harassed,” she added.

Trainees said Muay Thai also helps them get rid of negative emotions, heal from sexual harassment and feel empowered—rejecting traditional attitudes where women are blamed for sexual assault, rather than the men who attack them.

“We share the incidents that we have been subjected to and tell one another how we should have dealt with them,” said 16-year-old Oswa Abdel Nabi.

“Muay Thai is not just a sport but a real weapon against sexual harassment and violence.”