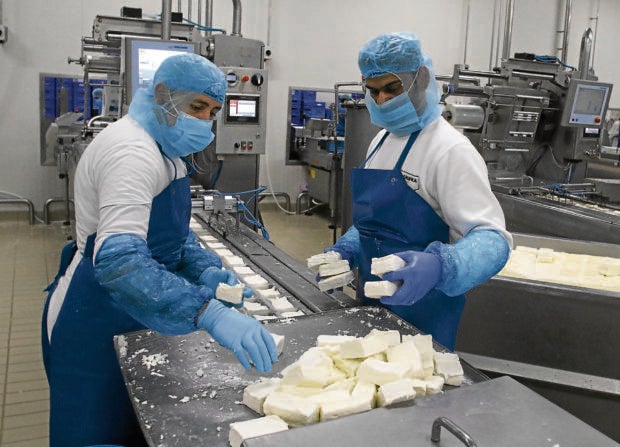 PROTECTED STATUS Workers pack halloumi cheese at the Petrou Bros Dairy on April 2 in Aradippou, Cyprus, where the dairy product is valued as a top export other countries have tried to imitate. —REUTERS

ARADIPPOU — Cyprus is getting protected status for its prized halloumi, giving its producers the sole right to sell the rubbery cheese in the European Union (EU).

Later this month, the EU is set to formally give halloumi—or “hellim” in Turkish—the protected designation of origin (PDO) status, which will come into effect from October, according to Cyprus’ agriculture ministry.

The move reaffirms what the industry and state have said for years, said cheesemaker George Petrou, general manager of Petrou Bros. Dairy Products, which has about 25 percent of the nation’s export market: That halloumi is Cypriot, with historical accounts suggesting production as early as around 1500.

“Unfortunately in recent years, many countries tried to copy us so the registration will help very much, in that other countries will not produce halloumi or something similar which misleads consumers,” Petrou said.

As a child, he learned the secrets of making the cheese from his late mother, Kakkoulou, who sold it at farmers’ markets. As she gently stirred the milk to separate the curds in a vast “hartzin” or cauldron, he would mill around the kitchen, observing her.

In 1982, Petrou started selling halloumi under the Alambra brand to supplement his income as a first-division footballer and he hasn’t looked back.

From using 250 liters of milk a day to make halloumi, his company, initially set up with an elder brother, now processes 250 tons of milk per day, employs 220 people and exports to 40 countries.

Its expansion mirrors that of Cyprus’ halloumi production.

Now the country’s second most valuable export after pharmaceuticals, the industry has grown between 20 and 22 percent annually for the past five years, according to official data. The agriculture ministry says it has now set its sights on penetrating the Chinese market.

There were hurdles to overcome in securing the prized PDO status, including disagreements on the ratios of goat, sheep and cow’s milk in the recipe.

Until 2024, the ratios will be set by decree and after that, at least 50 percent will be made up of sheep and goat’s milk, with the rest supplemented by cow’s milk.

Although recipes for halloumi abound online, for locals, enjoyment is in the versatile cheese’s simplest form—tossed into a frying pan or on a barbecue, eaten raw with melon in the summer, or cubed and boiled with trahana, a cracked wheat and yogurt soup eaten in winter.

“A lot of tourists come here looking for it,” said Evroulla Ioannou, who serves up grilled halloumi at her popular restaurant in Nicosia, Cyprus’ capital.

“Some … only know it by name so they come to try it and from what I see, they really like it,” she said.