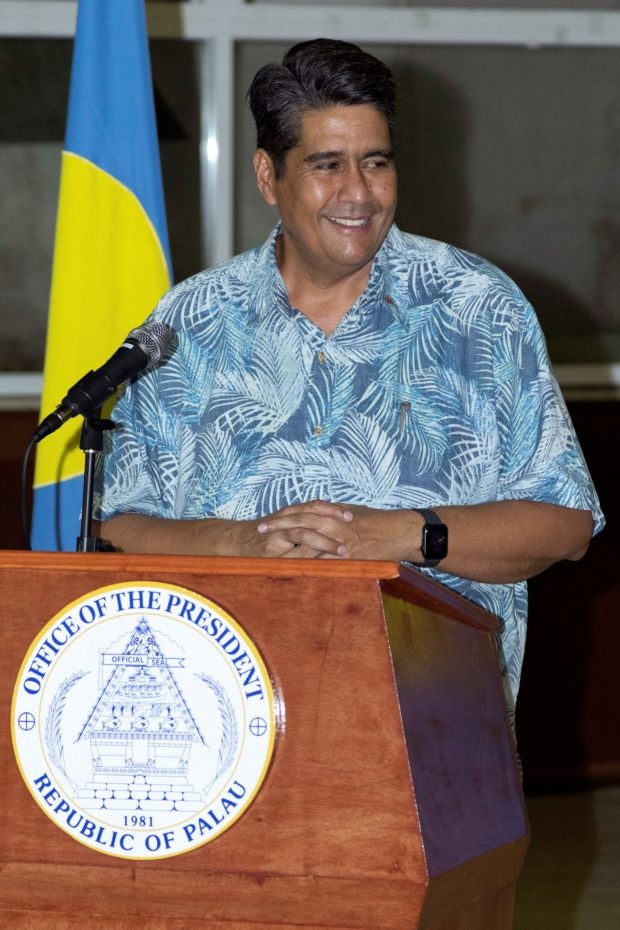 In this photo taken on April 1, 2021, Palau President Surangel Whipps speaks as he greets tourists from Taiwan during their arrival in Koror after Taiwan and Palau launched a rare holiday travel bubble as the two diplomatic allies try to kickstart their battered tourist industries after successfully keeping Covid-19 infections at bay. (Photo by Richard W. BROOKS / AFP)

HONG KONG – He leads one of the world’s smallest nations, but Surangel Whipps says Palau will not be bullied by anyone into deciding its future — least of all by China.

The Pacific nation of around 21,000 people is one of just 15 countries that still recognise Taiwan over China, something Whipps is adamant will not change under his watch despite Beijing’s pressure campaign.

“If we were the last man standing we should be because Taiwan has been with us from the beginning,” he told AFP via video call this week after returning from a trip to Taipei, where the two allies set up a coronavirus travel bubble for tourists.

Authoritarian China claims democratic, self-ruled Taiwan as its own territory and has vowed to one day seize it, by force if needed. 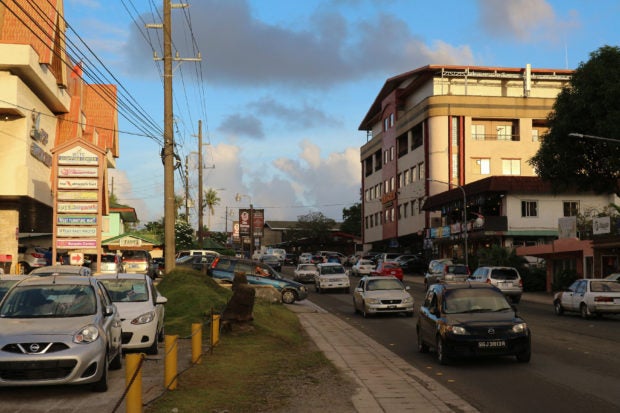 File photo shows a general view of the commercial centre of Koror in the Pacific island nation of Palau.. (Photo by Mikhail FLORES / AFP)

Beijing has whittled down Taiwan’s remaining diplomatic allies using a mixture of carrots and sticks.

In 2019, it had two successes in the Pacific, persuading the Solomons and Kiribati to switch sides.

Only Palau, the Marshall Islands, Nauru and Tuvalu remain.

Whipps has emerged as the most vocally China-sceptical leader in the Pacific, something he says is forged from both Beijing’s more aggressive stance under President Xi Jinping, and his own interactions with Chinese officials.

“I’ve had meetings with them and the first thing they said to me before, on a phone call, was ‘What you’re doing is illegal, recognising Taiwan is illegal. You need to stop it’,” he recalled.

“You know, that’s the tone they use,” he added. “We shouldn’t be told we can’t be friends with so and so.”

Whipps said he would often receive calls on his mobile from Chinese officials in the run-up to last year’s elections.

“It would ring for like 16 times,” he said. “After the elections, I have not taken their calls.”

Beijing has largely opted for the diplomatic stick when it comes to Palau recently.

Located around 900 kilometres (600 miles) east of the Philippines, Palau saw explosive growth in the number of Chinese tourists in the early half of the last decade.

That decision, Whipps believes, backfired because it heightened Palauan awareness of Chinese pressure.

“That’s just an example of how it’s kind of bait,” he said, summarising the Chinese position as: “You do this for me, then we expect this and this.”

That scepticism is music to Washington’s ears as it tries to shore up alliances in the Pacific to counter Beijing’s growing regional clout.

Palau was one of a group of Pacific islands administered by the United States in the aftermath of World War Two.

It became independent in 1994 but maintains close links with Washington.

Like other nearby Pacific nations, it has a 50-year defence agreement with the United States known as the Compact of Free Association (COFA).

US forces are under Japanese pressure to draw down their massive bases in Okinawa and are looking to diversify across the Pacific.

Whipps says he is keen to see more US military bases, something he hopes will make his nation less reliant on tourism.

“I think there’s an opportunity for everybody to gain from this,” he said.

A key battlefield during World War Two, Palau forms part of the “second island chain” that US military strategists see as key obstacles to China dominating the Pacific.

“The Japanese back then saw the strategic importance, and I think it still remains today,” Whipps said.

While Whipps has spent most of his life in Palau, he was born in Baltimore, studied in the United States and speaks with an American-tinged accent.

He renounced US citizenship to become a Palau senator.

But he remains fervently pro-US, adding Palau — which has recorded zero coronavirus cases — was on track to have all adults inoculated by May thanks to vaccines supplied by Washington under COFA.

He also described Taiwan, which began diplomatic relations with Palau in 1999, as more than just an ally.

The island’s indigenous population are Austronesians and it was their forefathers who spread out across the Pacific tens of thousands of years ago.

Beijing’s push to keep Taiwan isolated, especially during the coronavirus pandemic, has only heightened international sympathy for Taipei, he argued.

“Taiwan is a free country,” Whipps said. “They’re a democracy and that should be respected.”

“As diplomatic allies, you can’t just throw that out the door.”