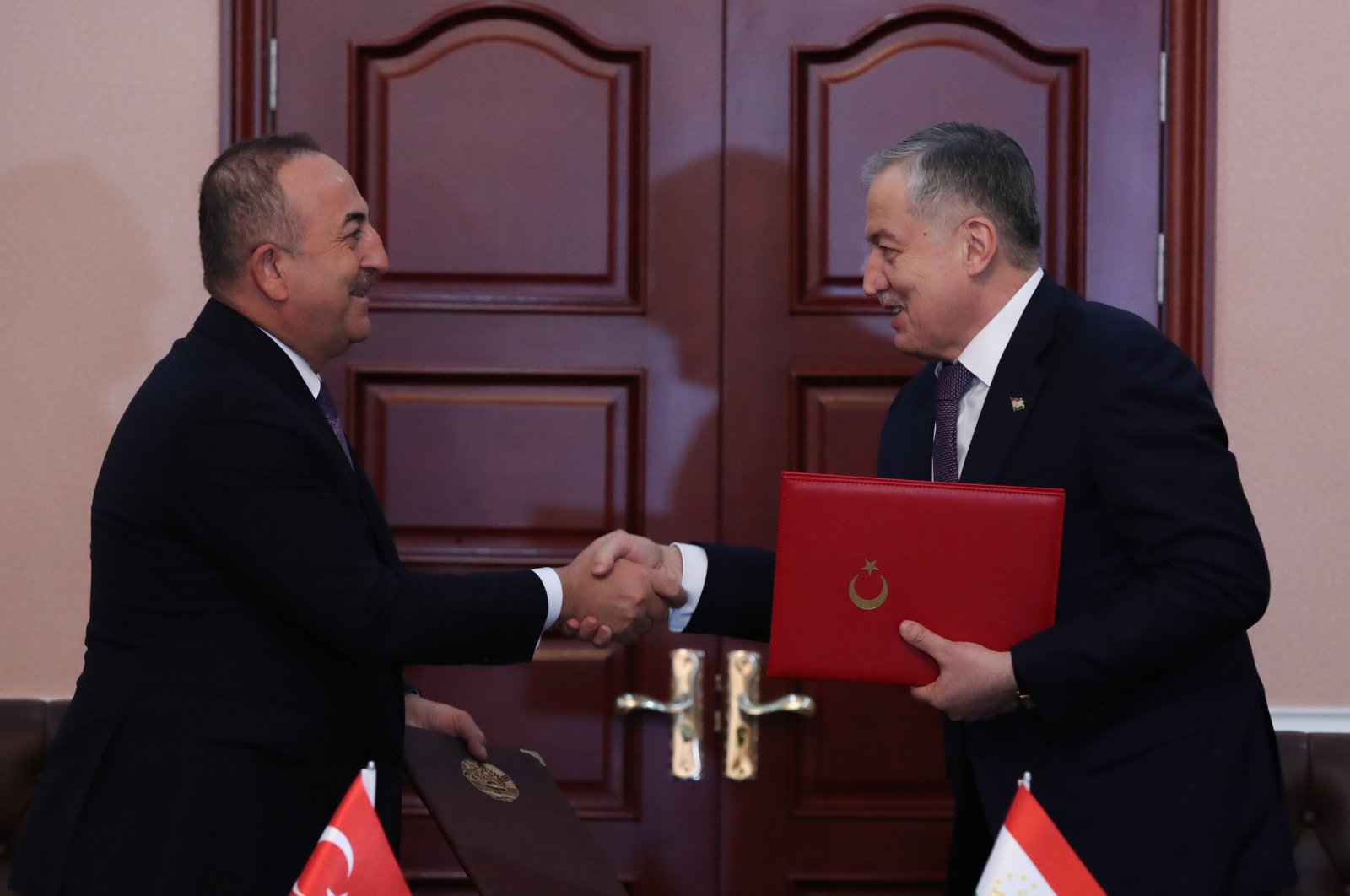 Turkish Foreign Minister Mevlüt Çavuşoğlu spoke with his Tajik counterpart Sirojiddin Muhriddin at a joint press conference, where they highlighted issues such as bilateral relations during the COVID-19 crisis and economic cooperation.

Emphasizing that Turkey attached great importance to connectivity in the region, Çavuşoğlu said, “Many projects are coming to life, and now Turkey supports Tajikistan, in particular, to take part in these projects in a powerful way.”

Çavuşoğlu arrived in Tajikistan on Sunday for a three-day official visit to participate in the 9th Ministerial Meeting of the Heart of Asia-Istanbul Process.

Stating that they have discussed the steps they can take to improve bilateral relations with their counterparts, Çavuşoğlu said that they also evaluated the mutual visits to be made this year and in the future.

Çavuşoğlu also said that President Recep Tayyip Erdoğan hopes to visit Tajikistan this year, a trip that had been postponed due to coronavirus restrictions, and they would like to organize a Cooperation Council Meeting on the occasion of the visit.

He expressed that Erdoğan would be very pleased to host Tajikistan’s president, Emomali Rahmon, at the Antalya Diplomacy Forum to be held on June 18-20.

Pointing out that Tajik citizens are exempt from visas for their travels to Turkey for up to 90 days, Çavuşoğlu said, “Hopefully, in the coming period, in which we are now working, Tajikistan also abolishes visas for citizens of the Republic of Turkey.”

Çavuşoğlu underlined that Turkish Airlines (THY) wants to organize more flights to the country, and they seek the help of Tajik authorities in this regard.

“We will work hard together for the successful implementation of this cooperation program,” Çavuşoğlu said, indicating that they signed a Cooperation Memorandum of the Cooperation Program and Protocol for the 2021-2023 period between the foreign ministries of the two countries during their meeting Monday.

According to the Turkish Foreign Ministry, Turkey ranked third among the countries that provided assistance to Tajikistan during the COVID-19 pandemic. The total value of Turkish investments in the country between 2009 and 2019 was $200 million (TL 1.64 billion).

Saying that he will be meeting with Rahmon, Çavuşoğlu said they had also had very useful meetings with the President of the House of Representatives Mahmadtoir Zokirzoda and Industry and New Technologies Minister Sherali Kabir.

Çavuşoğlu congratulated Tajikistan for the Heart of Asia-Istanbul Process 9th Ministerial Conference, which is to be held tomorrow under the co-chairmanship of Tajikistan and Afghanistan.

“I will be happy to see my brother in the meeting on Afghanistan (which) will be held in Turkey. On this occasion, once again, I would like to thank you very much for this visit and useful talks,” Çavuşoğlu said.

Çavuşoğlu pointed out that the relations between Turkey and Tajikistan have developed in many areas, including economic, trade, culture, security, education and consular affairs.

“We are the fifth largest investor country in Tajikistan and we saw the desire of our companies to invest more in the meeting last night. We had the opportunity to sincerely deal with the areas and subjects where our companies could be encouraged for more investment, such as transportation and logistics,” he stated.

The bilateral trade volume between the two countries was $322 million in 2020. The total value of 52 projects undertaken by Turkish contractors in the Central Asian country is $660 million.