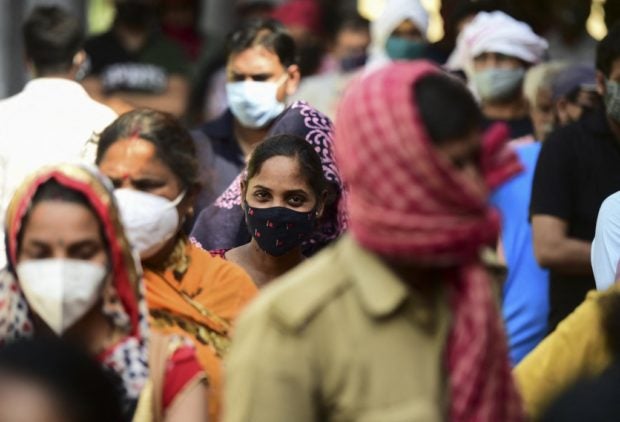 People stand in a queue to register for a Covid-19 coronavirus test, at a testing centre in Allahabad on April 6, 2021. (Photo by SANJAY KANOJIA / AFP)

MUMBAI — Hospitals in Maharashtra are running short of beds, piped oxygen and a key anti-viral drug as a second wave of coronavirus infections has swamped India’s richest state, doctors and patients’ families said.

Home to India’s financial capital Mumbai, Maharashtra accounts for nearly a quarter of India’s 12.7 million coronavirus infections. If the state were a country, its caseload of more than 3 million would be tenth largest in the world.

The western state has been reporting the most number of daily infections nationally for weeks. India’s overall daily cases rose above 100,000 for the first time on Monday, taking it past the peak of the first wave of infections last September.

“This is much, much worse than the September wave,” said Sandhya Fernandes, whose SOS Saviours group helps patients and relatives track beds in hospitals in and around Mumbai.

“We know of hospitals in Mumbai that are giving out tokens for COVID-19 beds … but patients end up waiting for three days or more for their turn.”

Farah Pavri went to hospital after hospital for five hours seeking a bed for her 75-year old aunt on Monday, until a desperate plea on Twitter caught the attention of local authorities and help was extended.

“Everywhere I went, there were people already in line, waiting for beds, and there were more coming behind us,” Pavri said.

Maharashtra’s health ministry did not immediately respond to an email seeking comment.

Desperate to slow the spread of the disease, the state imposed a night curfew since Monday for the rest of the month, shut down restaurants, malls and places of worship and barred the movement of most people on weekends.

The plight of Maharashtra, a state where the health infrastructure is among the best countrywide, augurs poorly for rest of the country. It could also delay India’s recovery from the economic hit, as Maharashtra is the country’s most industrialized state.

Critical care beds in many hospitals in at least four major cities in Maharashtra – Pune, Nagpur, Aurangabad and Nashik – are now full, said six senior doctors Reuters spoke with in the state. They described the situation in their hospitals and what they had heard from patients seeking admission.

In Mumbai, 60% of 1,924 intensive-care COVID-19 beds were occupied, according to local authorities.

As supplies of oxygen and antiviral drug Remdesivir, made by Gilead Science, dry up in some places, the state has asked police to crack down on sales in the black market, said Rajendra Shingane, minister of food and drugs administration.

In the city of Aurangabad, home to several factories including Bajaj Auto, demand for oxygen has risen five-fold in the past month, a local government official said.

All 262 ventilator beds in the city were occupied, said the official with direct knowledge of the matter, declining to be named as he was not authorised to speak to the media.

Ramanan Laxminarayan, of the Center for Disease Dynamics, Economics & Policy in New Delhi, said Maharashtra’s high degree of urbanization and industrialization – which means more intermingling of people – could be one reason for the second surge.

The other is high testing per capita compared with many other states.

“It’s hard to fudge any data in these systems, because it’s a good system that works well in good times and bad times,” he said.