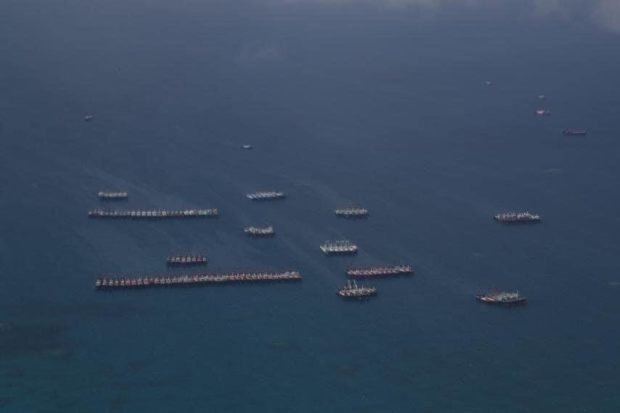 Chinese vessels remained in place on Julian Felipe (Whitsun) Reef in the West Philippine Sea, despite a diplomatic protest and a demand by Defense Secretary Delfin Lorenzana for them to leave the area, which is inside the Philippines’ exclusive economic zone. AFP

MANILA, Philippines — Aides of Philippine President Rodrigo Duterte on Monday criticized China for what they called territorial incursions by hundreds of its vessels, which his legal counsel warned could damage ties and lead to “unwanted hostilities”.

In some of the strongest words yet from Duterte’s camp about China’s conduct in the South China Sea, his lawyer Salvador Panelo called the prolonged presence of boats an unwelcome stain on relations that risked “unwanted hostilities that both countries would rather not pursue”.

“We can negotiate on matters of mutual concern and benefit, but make no mistake about it – our sovereignty is non-negotiable,” Panelo said in a statement.

Duterte’s spokesman Harry Roque echoed the view and told a news conference: “We will not give up even a single inch of our national territory or our exclusive economic zone (EEZ).”

China’s embassy in Manila did not immediately respond to a request for comment.

Though Philippine diplomats and top generals have spoken out against China lately, the comments from the presidential palace are unusually strong given Duterte’s reluctance to confront Beijing, which he has sought to befriend.

His refusal to press China to respect a landmark 2016 arbitral ruling that clarified the Philippines sovereign rights in its EEZ has frustrated nationalists, who accuse Duterte of gambling with territory in return for elusive Chinese investment.

Duterte has previously said challenging China was pointless and risked starting a war.

The Philippines last month filed a diplomatic protest over a “swarming and threatening” presence of 220 Chinese vessels it believed to be manned by militias at Whitsun Reef, a stance backed by ally the United States.

On Monday, its foreign ministry rejected China’s view that Whitsun Reef was a traditional fishing ground in its waters, and said it would send a diplomatic protest each day that China boats stayed there.

It said the boats “blatantly infringe” on Philippine jurisdiction.

Brunei, Malaysia, Taiwan, China and Vietnam also have competing claims for islands and features in the area.

Panelo also said the Philippines would not be blinded by China’s humanitarian gestures, referring to millions of COVID-19 vaccines donated by China.