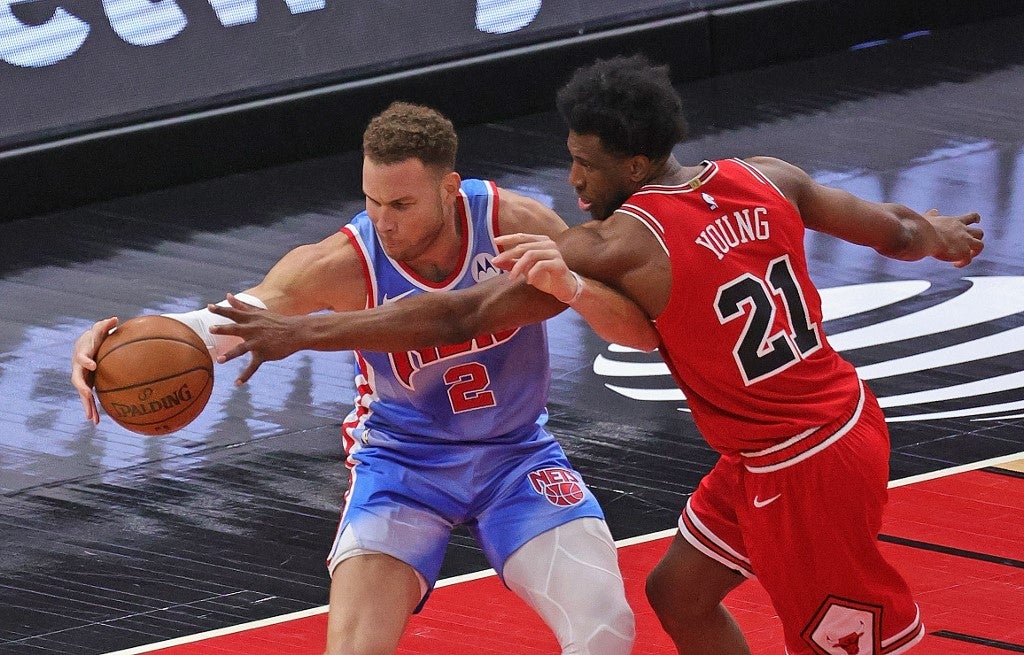 Blake Griffin #2 of the Brooklyn Nets is fouled by Thaddeus Young #21 of the Chicago Bulls at the United Center on April 04, 2021 in Chicago, Illinois. Jonathan Daniel/Getty Images/AFP (Photo by JONATHAN DANIEL / GETTY IMAGES NORTH AMERICA / Getty Images via AFP)

The Brooklyn Nets return home to the Barclays Center on Monday, looking to bounce back from just their second loss in the last eight games, when the New York Knicks make the short trip to Brooklyn.

The Nets, playing without James Harden on the first leg of a back-to-back Sunday, lost in Chicago, 115-107. The loss snapped a four-game winning streak and dropped Brooklyn out of first place in the Eastern Conference.

Kyrie Irving dished 15 assists against the Bulls and scored 24 points but went 0-of-4 shooting from 3-point range. Brooklyn knocked down 11-of-28 from beyond the arc as a team, but Chicago trumped the Nets’ 48.4-percent field-goal shooting with a 55.1-percent effort.

The 107 points that Brooklyn scored on Sunday marked its lowest output since 88 at Utah on March 24, which was also the Nets’ last loss.

Harden’s absence due to a hamstring injury was his second straight. Nash said in a press conference Friday, when Harden missed the Nets’ 111-89 rout of Charlotte, the nine-time All-Star and 2018 Most Valuable Player is day-to-day.

Harden is averaging 26.1 points, 11.2 assists and 8.9 rebounds per game in his 33 contests since joining Brooklyn in a trade from Houston.

Fellow former MVP Kevin Durant, who has been out with a hamstring strain since Feb. 13, could return as early as Monday’s matchup with the crosstown-rival Knicks. Adding a standout of Durant’s caliber gives the Nets a boost in the late-season push for the top seed in the East, and could come amid other depth concerns for Brooklyn.

While Durant’s return appears imminent, and Harden’s injury should not keep him out long, the reunion of Brooklyn’s Big Three is not of concern to the Knicks amid their own playoff push.

“We’re not really concerned about their Big Three,” Julius Randle said in his postgame press conference after a 125-81 blowout of Detroit on Saturday. “We know what kind of basketball we will be able to play. We focus on our team and the game plan the coach draws up. That’s all we’re focused on: the Knicks.”

Randle finished with 29 points and eight rebounds, and Reggie Bullock added 22 points in the lopsided win.

The Knicks are 0-2 this season against the Nets, dropping games both with and without Durant in the lineup. Randle posted 33 points, 12 rebounds and six assists in the 117-112 New York loss on March 15, but Irving’s 34 points and a 21-point, 15-rebound, 15-assist triple-double from Harden were too much for the Knicks to overcome.

Randle leads New York in points, rebounds and assists at 23, 10.7 and 5.8 per game. RJ Barrett — the Knicks’ second-leading scorer at 17.2 points per game — finished with 23 points and shot 10-of-10 from the free-throw line in New York’s last matchup with Brooklyn.