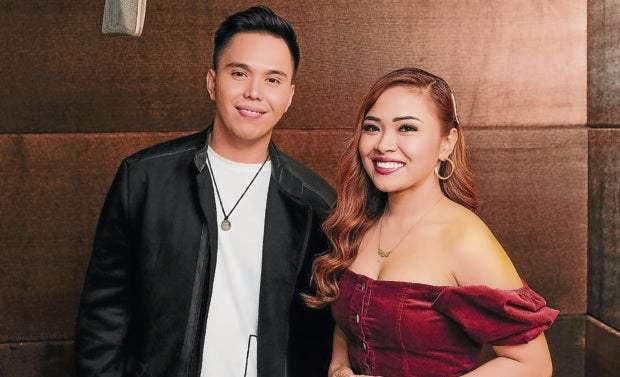 For Alisah Bonaobra and Myko Mañago, making the rounds through various singing contests proved to be helpful in their shift to becoming professional recording artists.

“There are times when you just feel like going home, especially if the contestant before you gives a great performance,” he told the Inquirer in a recent virtual conference for his new duet ballad with Alisah, titled “Pangako” (RJA Productions). “But as you go along, you learn to overcome your nerves onstage. You learn how to pump yourself up and not let fear get to you.”

Singing in a competition and performing in a regular show require different mind-sets and approaches, pointed out Alisah, who’s best known for finishing runner-up in “The Voice PH” Season 2 and her stint in “The X Factor UK” 2017.

“Being in a contest is definitely more nerve-wracking because you’re up against others. It’s difficult. It can be scary, so you have to be focused,” she said. “When it comes to live shows, it’s all you.”

But now as working singers, Alisah and Myko can afford to be more relaxed onstage and show more of their personalities. “You can now focus on entertaining the audience. You no longer think about winning or losing; what matters is making listeners happy,” Myko said.

“But of course, there are still expectations, so you have to deliver in your performances,” Alisah said, adding that, though she and Myko are no longer actively competing, their hunger hasn’t waned one bit. “We never stopped dreaming. Only we can say how far we want to go. Sometimes, we doubt ourselves, but we’re thankful for the people who support us.”

Speaking of gigs, Alisah said she sorely misses real-time, human interactions. While she and Myko do weekly livestream sessions and occasional concerts, they can’t quite replicate the satisfaction that comes with live shows.

“I miss the adrenaline rush, the applause, the noise … the whole ambiance. All these things inspire us even more to do our best,” Alisah said. “So, during online shows, I just imagine that there are people there. And it can be heartening to see viewers’ comments and messages.”

Myko, on the other hand, has slowly been getting used to the setup. “I used to feel awkward in front of just a camera, so I just stare at the monitor,” he said. “I miss being able to go down the stage to thank people face-to-face. I miss going to their tables and taking photos with them.”

Despite the canceled projects and other opportunities they lost to the COVID-19 pandemic, the two singers are still thankful that they’re able to record and release new material, like “Pangako.”

“The song is about eternal love; something I can picture hearing at a wedding. The lyrics are simple, but honest and relatable,” related Alisah who’s currently taking up music at the University of Santo Tomas Conservatory. “We thought it would be nice to do a duet because we have been getting a lot of requests in our online shows.”

“We managed our expectations during the pandemic. But somehow, we were able to do lots of things,” she added. “And before we knew it, a year had already passed.” INQ