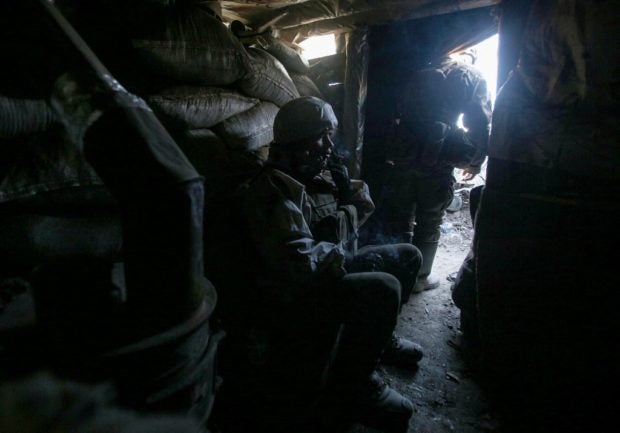 Ukrainian servicemen stand in position on the front line with Russia-backed separatists in Donetsk region on February 16, 2021. Ukraine has been fighting separatists backed by Russia in the Donetsk and Lugansk regions in eastern Ukraine since 2014 following Moscow’s annexation of the Crimean peninsula. Since then, more than 13,000 people have died and nearly 1.5 million have been displaced. (Photo by Anatolii STEPANOV / AFP)

KIEV, Ukraine — Russian-backed separatists accused Ukrainian forces of killing a child in a drone attack on Saturday, as Kiev reported the death of one of its soldiers in a mine explosion.

Kiev has been battling pro-Russian separatists in the eastern Donetsk and Lugansk regions since 2014, following Moscow’s annexation of the Crimean peninsula.

Reports this week swirled of Russian troop movements and an escalation of armed clashes, while Moscow and Kiev’s Western allies exchanged warnings.

Self-proclaimed Donetsk People’s Republic (DPR) claimed that a five-year-old child was killed and a woman injured on Saturday in a Ukrainian drone attack.

A report by the DPR’s news agency has not provided any images of the aftermath of the attack allegedly carried out in the village of Oleksandrivske some 15 kilometres (nine miles) from the front line.

The claim cannot be independently verified as both international monitors and the Ukrainian defense ministry have not responded to AFP’s requests for a comment.

Meanwhile, a Ukrainian soldier was killed when an explosive device went off near the village of Shumy north of the separatist’s de facto capital Donetsk, the army said.

“A soldier from the Joint Forces received an injury incompatible with life,” the Ukrainian military said in a statement posted on Facebook.

Ukraine this week accused Russia of massing thousands of military personnel on its northern and eastern borders as well as on the Crimean peninsula.

Moscow has repeatedly denied sending troops and arms to back up the separatists and Russian President Vladimir Putin’s spokesman Dmitry Peskov stressed on Thursday that Moscow is at liberty to move troops across its territory.

Germany and France, which have played a mediating role in Russia-Ukraine tensions, released a joint statement on Saturday calling for “restraint” and “immediate de-escalation” from all sides.

Reaffirming their “support for the sovereignty and territorial integrity of Ukraine”, Berlin and Paris said they were “concerned about the growing number of violations of the ceasefire” brokered last July.

On Friday US President Joe Biden affirmed his “unwavering support” for Ukraine in a call to Ukrainian President Volodymyr Zelensky after Russia earlier that day warned the West against sending troops to Ukraine to buttress its ally.

Moscow and Kiev this week blamed each other for a rise in violence along the frontline that has undermined the ceasefire.

Zelensky said on Thursday that 20 Ukrainian servicemen had been killed since the start of the year.

The fighting has claimed more than 13,000 lives since 2014, according to the United Nations.