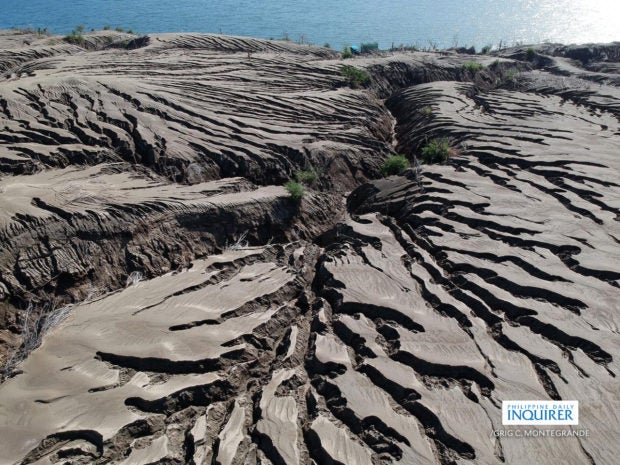 FILE PHOTO: Taal Volcano island once home to 8,000 people whose communities depended on tourism and fishing has been reduced to an eerie landscape after the eruption in January 2020. A drone shot on January 11, 2021, shows gullies that have been formed on the volcano’s ash-laden slopes due to rainfall in the area. INQUIRER/GRIG C. MONTEGRANDE

MANILA, Philippines — Alert Level 2 remains over Taal Volcano as the Philippine Institute of Volcanology and Seismology (Phivolcs) reported on Friday morning that 269 volcanic earthquakes were recorded in the area in the last 24 hours.

According to Phivolcs’ 8 a.m. bulletin, 219 of the recorded quakes were “episodes of volcanic tremor” lasting for one minute to 37 minutes while 49 were low-frequency volcanic quakes. Phivolcs also said it recorded one volcano-tectonic temblor.

Phivolcs likewise said that temperature in the area was at highs of 71.8 degrees Celsius last March 4, and water in the volcano’s Main Crater Lake was at pH 1.59 (a measure of how acidic or basic water is) on February 12.

Further, Phivolcs said data analysis indicated “a very slow and steady inflation and expansion of the Taal region since after the January 2020 eruption.”

“These parameters may indicate increased magmatic activity at shallow depths beneath the edifice,” it added.

Phivolcs said that while Alert Level 2 is maintained at Taal Volcano, the unrest “has been elevating and is under constant evaluation.”

Under Alert Level 2, sudden steam-driven or phreatic explosions, volcanic earthquakes, minor ashfall, and lethal accumulations or expulsions of volcanic gas can occur and threaten areas within and around the Taal Volcano Island (TVI).

“DOST-PHIVOLCS strongly recommends that entry must be strictly prohibited into Taal Volcano Island, Taal’s Permanent Danger Zone or PDZ, especially the vicinities of the Main Crater and the Daang Kastila fissure, and occupancy and boating on Taal Lake,” Phivolcs stressed.

State volcanologists raised the status of Taal Volcano to Alert Level 2 more than a year after its last phreatic eruption in January 2020.