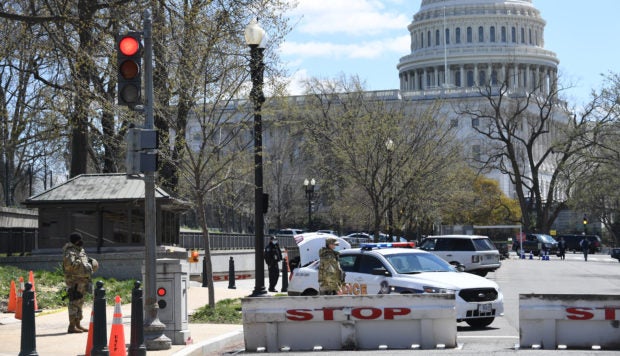 WASHINGTON, D.C. –  Two officers were injured near the US Capitol on Friday after being rammed by a vehicle less than three months after the Congress came under attack from an extreme-right mob, police said.

The Capitol was on lockdown amid reports of shots having been fired in the incident.

“A suspect is in custody. Both officers are injured. All three have been transported to the hospital,” the US Capitol Police said on Twitter.

Television footage showed a blue sedan that had crashed into a security barrier on one of the streets leading to Congress, as what appeared to be the injured officers were loaded onto gurneys and into ambulances. 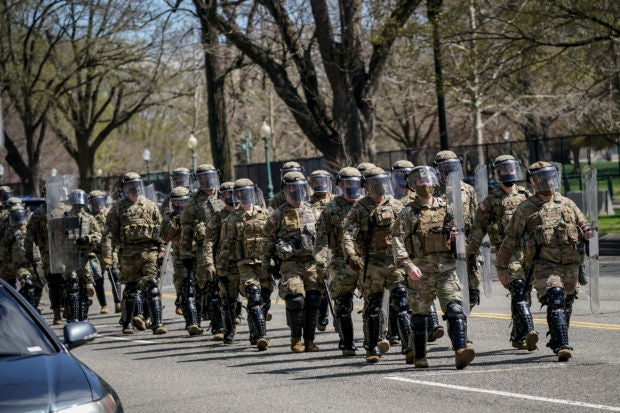 WASHINGTON, DC – APRIL 2: National Guard troops arrive along Constitution Avenue as law enforcement responds to a security incident near the U.S. Capitol on April 2, 2021 in Washington, DC. The U.S. Capitol was locked down after a person reportedly rammed a vehicle into two Capitol Hill police officers. A suspect was apprehended.  (Photo by Drew Angerer / GETTY IMAGES NORTH AMERICA / Getty Images via AFP)

No information was immediately available on the identity or condition of the driver.

The incident came amid tightened security in Washington after the January 6 insurrection by supporters of then-president Donald Trump.

Five people, including a Capitol Police officer, died in the assault inspired by Trump’s groundless claims that he had lost the November presidential election due to massive fraud.

Since then security officials have said there is an ongoing threat from extreme right groups and Trump supporters.

More than 300 people have been charged in the January attack, including members of armed extremists groups like the Proud Boys and Oath Keepers, and 100 more are expected to be charged, according to Justice Department court filings.

In recent weeks some security has been loosened, with the number of armed National Guard troops at the Capitol reduced and a security fence that created a broad perimeter around the Capitol complex removed.

The danger on Friday was limited as Congress was in recess and relatively few people were in the building.

But CBS News reported that security officials had already warned congressional staffers of a threat before the car ramming.