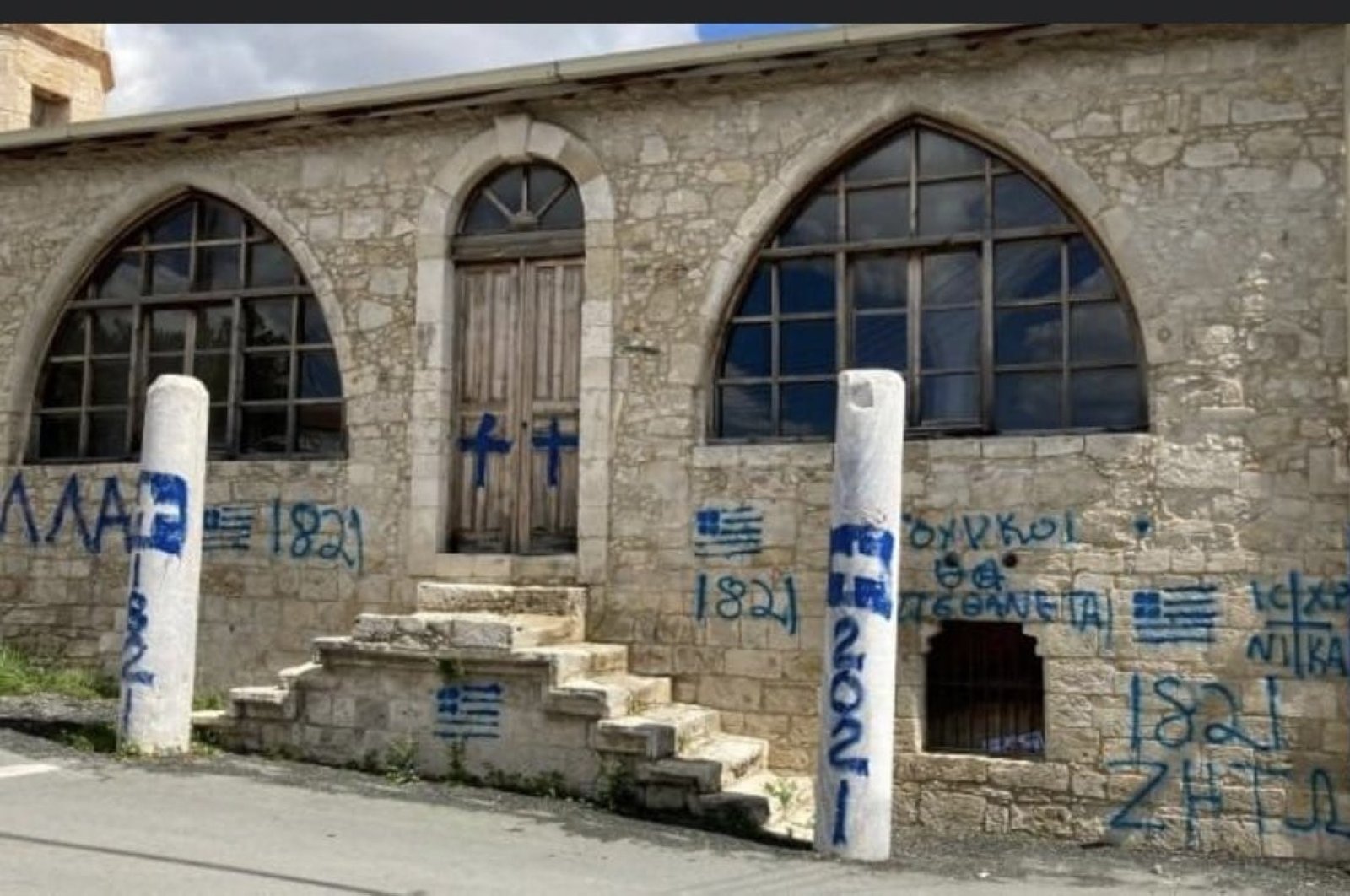 Turkey condemned the attack on a mosque in the Greek Cypriot administration’s Limassol province as efforts for talks on the divided island continue, the Turkish Foreign Ministry stated Friday.

“It is clear that such provocative acts at a time when efforts for a solution to the Cyprus issue have intensified, will not help establish trust between the two communities,” the ministry said in a written statement.

President Recep Tayyip Erdoğan also touched upon the issue on the same day and stated: “Unfortunately the Greeks do these kinds of acts all the time. The fact that this is being done during the (European Union) summit, is nothing other than provocation.”

He added in a tweet that “All Turks shall die” was written on the mosque.

According to Turkish News Agency-Cyprus (TAK), unidentified individuals wrote slogans praising the Greek uprising on its anniversary of March 25, 1821 along with the Greek flag and a cross drawn on the walls and doors of the mosque in the village of Episkopi (Piskobu-Yalova) in Limassol.

Tatar, in a statement from the press and public relations department of the TRNC presidency, said all mosques and sacred places located on the Greek side are being attacked.

Tatar mentioned that the “Greek Cypriot mentality was once again demonstrated by this event,” saying “it is also worth recalling that during the period of 1963-1974, hundreds of our mosques were attacked and destroyed.”

“Our advice to the Greek Cypriot administration and its leadership is that it should not organize and support such racist and fascist attacks, prevent them and arrest those responsible as soon as possible,” he added.

Meanwhile, Turkish Cypriot Prime Minister Ersan Saner also condemned the attack and the “racist attitude” being demonstrated by the incident.

Saner stressed that the Greek Cypriot administration should locate the perpetrators of the incident and bring them to justice, saying what was done was a provocation and could not be accepted.

“Is the Greek government so helpless? It cannot find the perpetrators of such attacks and bring them to justice. We expect the criminals to be found and punished,” he added, inviting the Greek Cypriot administration to take a deterrent stance against the attacks.

“We join the calls of TRNC President Ersin Tatar to refer the perpetrators to court as soon as possible and expect the issue to be followed closely and seriously to prevent such acts from happening again,” the ministry stated further.

Diplomacy traffic has accelerated ahead of the unofficial 5+1 meeting – including both sides in Cyprus, the three guarantor countries plus the U.N.

The EU has also welcomed plans to restart U.N. peace efforts for Cyprus at a leaders summit Thursday.

Earlier this month, the EU expressed that the bloc is ready to provide “whatever assistance” it can to both Turkish and Greek Cypriot leaders as well as the U.N., adding that it needs to get involved in the U.N.-led talks on Cyprus as the issue is an “EU problem.”

The island has been divided since 1964 when ethnic Greek Cypriot attacks forced the Turkish Cypriots to withdraw into enclaves to ensure their own safety.

In 1974, a Greek Cypriot coup, aimed at Greece’s annexation of the island, led to Turkey’s military intervention as a guarantor power to protect the Turkish Cypriots from persecution and violence.

The Greek Cypriot administration entered the EU in 2004, the same year that Greek Cypriots thwarted the U.N. brokered “Annan Plan” to end the decadeslong dispute.

Last month, Erdoğan ruled out discussing a federal system to reunify the island of Cyprus, insisting that a two-state accord is the only way forward. Tatar has strongly echoed Erdoğan’s stance. Greek Cypriots firmly reject any deal that would legitimize the island’s ethnic partition. The Greek Cypriot administration instead is proposing a “decentralized federation” under which the Greek and Turkish speaking zones would be granted more authority to run their own affairs.