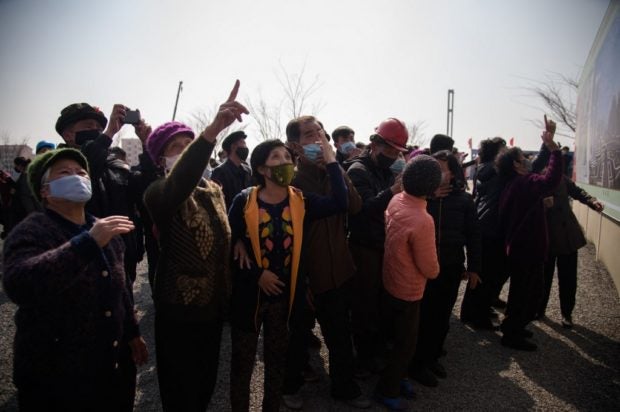 Mask-wearing people stand before a display board on a construction site showing a rendering of a new street being developed in the Songsin and Songhwa area of Pyongyang on March 25, 2021. The hermetic totalitarian state has yet to confirm a single case of the coronavirus. (Photo by KIM Won Jin / AFP)

MOSCOW — Russia’s embassy in Pyongyang said Thursday that conditions in North Korea’s capital had become exceptionally difficult after drastic measures were imposed to combat the coronavirus.

The hermetic totalitarian state, which has yet to confirm a single case of the coronavirus, has closed its borders, locked down entire cities and taken a range of other steps to try to prevent an outbreak.

In a post on its Facebook page, the Russian embassy said foreign diplomatic personnel were abandoning Pyongyang, with fewer than 300 foreigners remaining in the city.

“Not everyone, far from it, can endure restrictions that are unprecedented in their severity, the most acute shortage of essential goods, including medicine, and the inability to solve health problems,” it said.

The UN special rapporteur on the rights situation in North Korea last month warned that anti-coronavirus measures had caused “severe economic hardship” in a country already fraught with food insecurity.

Impoverished North Korea — which is under international sanctions over its nuclear weapons and ballistic missile programs — has long struggled to feed itself, suffering chronic food shortages.

The anti-virus shutdown has cancelled all flights in or out of the country, as well as cross-border trains.

In February, eight Russian diplomats and family members — the youngest of them a three-year-old girl — arrived home from North Korea on a hand-pushed rail trolley due to Pyongyang’s restrictions.

Video went viral of the trolley, laden with suitcases and women, being pushed across a border railway bridge into Russia.