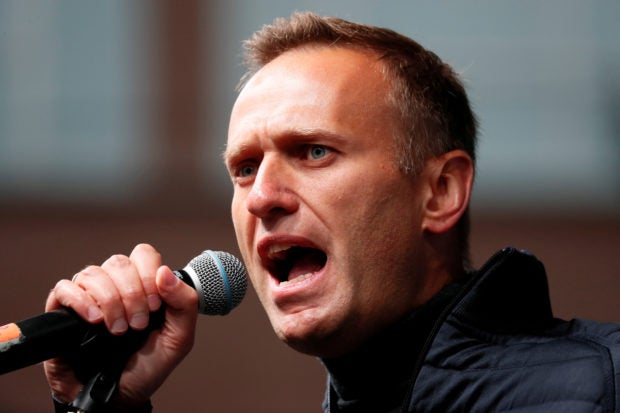 FILE PHOTO: Russian opposition leader Alexei Navalny delivers a speech during a rally to demand the release of jailed protesters, who were detained during opposition demonstrations for fair elections, in Moscow, Russia September 29, 2019. REUTERS/Shamil Zhumatov/File Photo

MOSCOW — Russia’s prison service has defended its treatment of Alexei Navalny, dismissing complaints by the hunger-striking Kremlin critic that he was not getting the medical care he needed in jail and was subjected to sleep deprivation.

Navalny, one of President Vladimir Putin’s most prominent critics, went on hunger strike on Wednesday to try to force the prison holding him to give him proper medical care for what he said was acute pain in his back and legs.

The opposition politician said last week that guards were waking him up every hour at night and that his appeals for medical care were being ignored. The West has demanded his release.

The local prison service in Vladimir region where the IK-2 facility holding him is located told Reuters that the prison measures Navalny was subjected to were strictly legal and were the same as those used against other inmates.

“Correction facility officers strictly respect the right of all inmates to eight hours of uninterrupted sleep,” it said late on Wednesday, adding that guards were required to patrol and visually check on inmates at night.

“These measures do not interfere with convicts resting,” it added.

“…Navalny is being provided with all necessary medical care in accordance with his current medical conditions,” it said.

In a handwritten letter addressed to the governor of his prison which was posted to social media by his team on Wednesday, Navalny said daily requests for a doctor of his choice to examine him and for proper medicine had been ignored.

Alexei Barinov, a doctor, told Reuters that Navalny’s lawyers had asked him to treat Navalny and that they had requested the prison service either allow him into the prison or to let Navalny out to a clinic.

“We’re waiting for a decision from the FSIN (prison service),” he said, adding that he was ready to go.