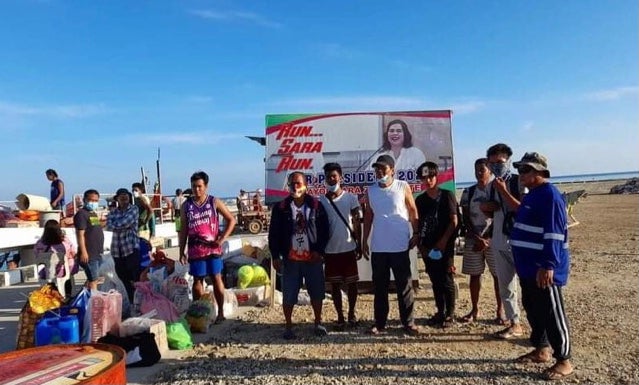 MANILA, Philippines—Posters urging the President’s daughter, Davao City Mayor Sara Duterte, to run for president in the 2022 elections have surfaced in what could be the Philippines’ least populated area, the Kalayaan Island Group, in the West Philippine Sea.

A “Run Sara Run” streamer made of tarpaulin was seen on Pag-asa Island (Thitu), a photo obtained by INQUIRER.net showed.

The photo, taken last March 31, was shared by a resident. It showed officials of Kalayaan, led by Mayor Roberto del Mundo and the municipality’s residents posing in front of a sheltered port with the streamer as a background.

In a photo with a similar backdrop uploaded by the Department of Information and Communications Technology (DICT) on Facebook, the streamer was blurred. The Kalayaan officials and DICT workers, however, had their group photo taken with them gesturing President Rodrigo Duterte’s signature fist bump.

Posted by Department of Information and Communications Technology – LC3 on Tuesday, March 30, 2021

The DICT employees were on the island to install new Wi-fi satellites to boost internet connectivity.

Pag-asa Island is the only Philippine-occupied outpost in the West Philippine Sea with civilian inhabitants. It has almost 400 voters.

The Run Sara Run posters have popped up in different cities nationwide, including Metro Manila. The campaign pushing the President’s daughter to run was said to have started by supporters from different groups. A survey by OCTA Research said that Sara Duterte was the leading choice of respondents to replace Duterte.

In response to these calls, Sara Duterte had thanked her supporters but said she might run in 2034 instead.

The Commission on Elections has earlier said paraphernalia urging Sara Duterte to run in 2022 was not a form of premature campaigning and did not violate any election law.