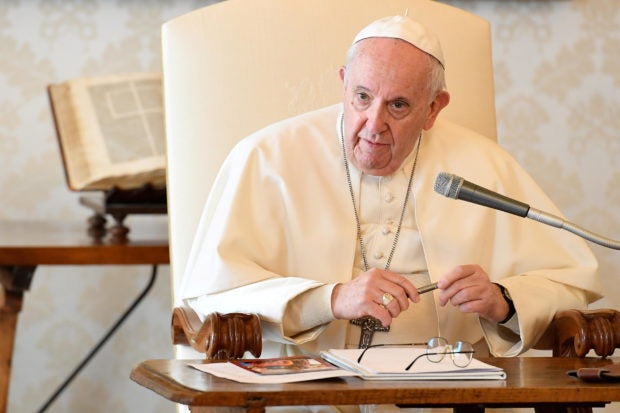 FILE PHOTO: Pope Francis receives in audience members of the Vatican COVID-19 Commission in the Vatican on March 26, 2021. Vatican Media/Handout via REUTERS

VATICAN CITY — Pope Francis adapted Shakespeare’s famous Hamlet quote in an appeal to people not to remain blind to the destruction of climate change and the mass migration it may cause, writing: “To see or not to see, that is the question.”

Pope Francis went on to urge people to work together to protect “creation, our common home” and not “hunker down” in individualism, in the preface of a document by the Vatican development office on the pastoral care of people displaced by climatic events.

“I suggest we adapt Hamlet’s famous ‘to be or not to be’ and affirm: ‘To see or not to see, that is the question!’ Where it starts is with each one’s seeing, yes, mine and yours,” Francis wrote.

“We are not going to get out of crises like climate or COVID-19 by hunkering down in individualism but only by ‘being many together’, by encounter and dialogue and cooperation,” he added in the preface to the 30-page study released on Tuesday.

Conservatives in the Church, many aligned with conservative political forces, are climate change skeptics and contest the majority scientific opinion that global warming is mostly caused by people.

Francis appeared to be appealing to such skeptics.

“When people are driven out because their local environment has become uninhabitable, it might look like a process of nature, something inevitable,” Francis wrote.

“Yet the deteriorating climate is very often the result of poor choices and destructive activity, of selfishness and neglect, that set humankind at odds with creation, our common home,” he said.

The pope criticized former U.S President Donald Trump when he withdrew the United States from the 2015 Paris accord to limit global warming. The Vatican has welcomed President Joe Biden’s return to the accord.

At the Climate Adaptation Summit hosted by the Netherlands in January, leaders were told that climate change could depress global food production by up to 30% while rising seas and greater storms could force hundreds of millions in coastal cities out of their homes.

“We really seem to be at the point of deciding, actively and passively, whether we are going to take care of the one home we have or destroy it,” Cardinal Michael Czerny, under-secretary of the Vatican development office, said at a news conference presenting the work.