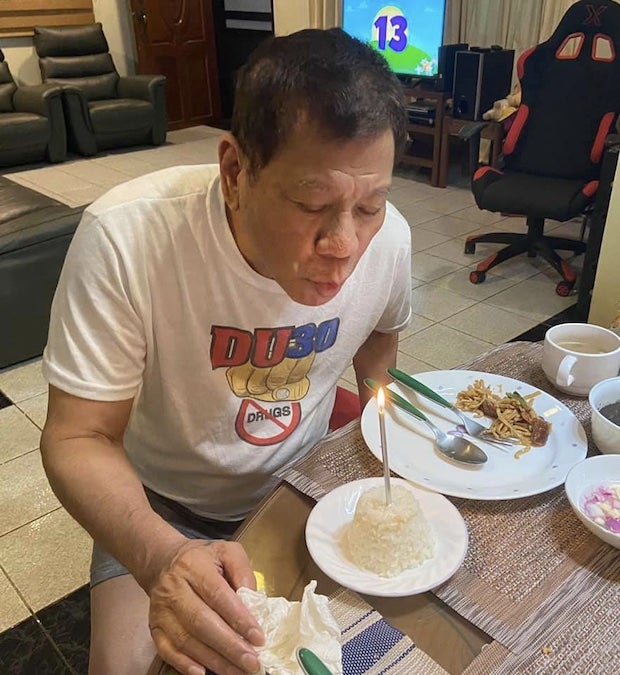 President Rodrigo Duterte blows a candle stuck into a mount of rice to mark his 76th birthday. (Photo from the Facebook acccount of Sen. Christopher Go)

DAVAO CITY, Davao del Sur, Philippines — A photo released by Sen. Christopher Lawrence Go on Sunday shows President Rodrigo Duterte blowing a candle stuck into a mound of rice, instead of a cake, on a plate in what appears to be a simple meal to mark his 76th birthday.

“He is blowing a candle just now,” Go posted in Filipino on his Facebook account at 6 a.m. on Sunday, showing the president wearing a T-shirt and shorts blowing a candle, near a plate with some leftover pancit canton on the table.

“In the long time that I have been with the President, I have come to admire and learn many things from him. One of those is his simple personality. Every time it’s his birthday, he has never had a party to celebrate. So in the 23 years that we’ve been together, I have chosen, like him, not to have a party every time it’s my birthday.]

He urged people instead to join the President in simple prayers and thanksgiving.

“There will be many more celebrations in our lives. What’s important now is for us to appreciate that we‘re alive and we continue to help each other to get past this crisis,” he added.