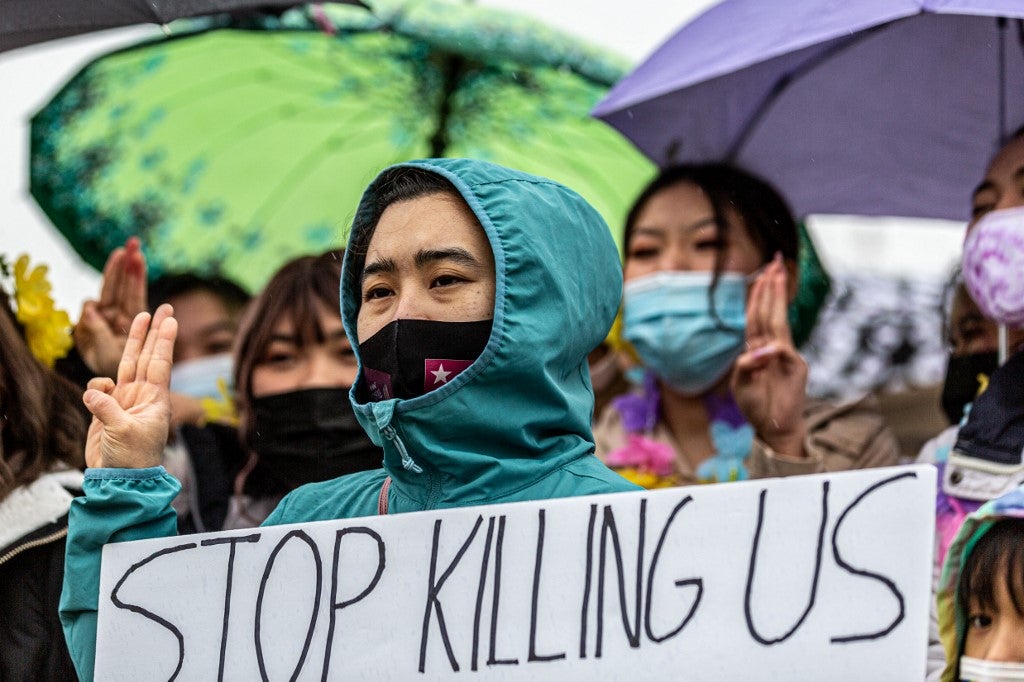 Demonstrators gather during the protest “Global Protest Revolution Day for Myanmar,” at Raspberry Island in the Mississippi River on March 27, 2021 in Saint Paul, Minnesota. – Myanmar’s security forces killed nearly 90 people in the bloodiest day since the military seized power, a monitoring group said Saturday, as the junta staged a major show of might for its annual Armed Forces Day. (Photo by Kerem Yucel / AFP)

YANGON, Myanmar — Defense chiefs from a dozen countries on Sunday jointly condemned the bloodbath in Myanmar a day earlier, when at least 90 people — including several children — were killed after security forces opened fire on protesters.

The newly imposed junta staged a major show of might for its annual Armed Forces Day Saturday as the death toll since the February 1 coup climbed to at least 423, according to a local monitoring group.

Myanmar has been in turmoil since the generals ousted and detained civilian leader Aung San Suu Kyi, triggering mass protests demanding a return to democracy.

The defense ministers of 12 countries including the United States, Britain, Japan and Australia on Sunday condemned the Myanmar military’s use of lethal force against civilians.

“A professional military follows international standards for conduct and is responsible for protecting -– not harming -– the people it serves,” the rare joint statement said.

“We urge the Myanmar Armed Forces to cease violence and work to restore respect and credibility with the people of Myanmar that it has lost through its actions.”

Mourners were expected to turn out for funeral processions across the country Sunday, after the bloodiest day since the putsch.

In the capital Naypyidaw Saturday there was a grand parade of troops and military vehicles, and junta leader General Min Aung Hlaing warned in a speech that acts of “terrorism” were unacceptable.

Violence erupted across the country with the military using live rounds in more than 40 townships across nine regions including the largest city Yangon, local monitoring group Assistance Association for Political Prisoners (AAPP) said.

sunset it was the deadliest day since the junta seized power, AAPP saying at least 90 people had been killed.

“The fact the illegitimate military regime is targeting children is a grave act of inhumanity.”

A reporter in Kyeikhto township, Mon state, was shot with a live bullet and suffered a leg wound, AAPP said.

Min Aung Hlaing once again defended the coup and pledged to yield power after new elections during his parade speech Saturday.

But he also issued a threat to the anti-coup movement, warning that acts of “terrorism which can be harmful to state tranquility and security” were unacceptable.

“The democracy we desire would be an undisciplined one if they pay no respect to and violate the law”, he said.

Armed Forces Day commemorates the start of local resistance to the Japanese occupation during World War II, and usually features a military parade attended by foreign military officers and diplomats.

The junta announced that eight international delegations attended Saturday’s event, including those of China and Russia — with a state media broadcast showing Russian deputy defense minister Alexander Fomin in the audience.

Meanwhile, rebels in eastern Myanmar said they had been targeted in air strikes late Saturday, hours after the rebel group had seized a military base.

The move marked the first such air assault since the military seized power, against the Fifth Brigade of the Karen National Union (KNU) — one of the country’s largest armed groups, which says it represents the ethnic Karen people.

The junta did not immediately comment, and there was no official confirmation of any casualties.