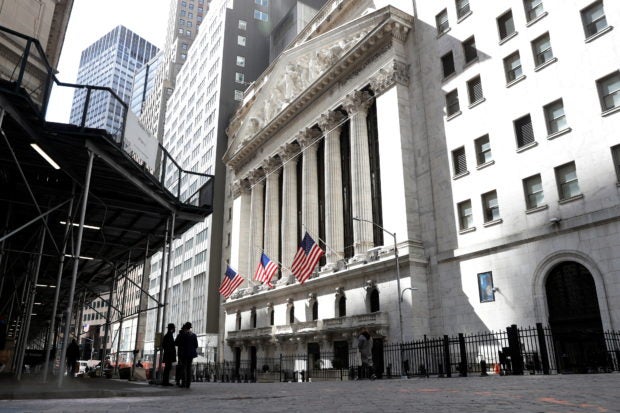 NEW YORK  – The S&P 500 and Dow rose in a broad-based rally on Friday with technology, healthcare and financial stocks providing the biggest lift as investors bet on a recovery that is expected to deliver the fastest economic growth since 1984.

The S&P 500 and the Dow ended a seesaw week higher as investors rebalancing their portfolios at the quarter’s end continued to buy stocks that stand to benefit from a growing economy while they added some beaten-down technology shares.

The Nasdaq also ended higher as less popular tech shares advanced, but the composite index posted its second weekly decline in a row.

Wall Street surged in the last half hour of trading, lifting all three indexes more than 1%. The S&P 500 and Dow eked out record closing highs.

The Russell 1000 value index, which includes energy, banks and industrial stocks, has gained more than 10% this year, outperforming its counterpart the Russell 1000 growth index, which is just above break-even for the year. (Graphic: Value vs Growth, https://fingfx.thomsonreuters.com/gfx/mkt/oakpelrxmvr/Pasted%20image%201616777421544.png)

Some of the tech heavyweights slid, such as Tesla Inc and Google parent Alphabet Inc, but Microsoft Corp and Facebook Inc bucked the trend, helping lift the S&P 500 and Nasdaq higher.

“It is less a move out of technology than a move that evidences a broader appetite for equities to include both growth and value,” said John Stoltzfus, chief investment strategist at Oppenheimer Asset Management in New York.

Volume on U.S. exchanges was 12.23 billion shares, compared with the 13.67 billion average for the full session over the last 20 trading days.

L Brands jumped 3.7% after the Victoria’s Secret owner raised its current-quarter profit forecast for the second time this month as it benefits from consumers spending their stimulus checks and relaxation of COVID-19 restrictions.

The Federal Reserve last week raised its GDP estimate for 2021 to 6.5% from 4.2% and many economists expect still faster growth, which has spurred fears the economy could run too hot and force the Fed to raise interest rates.

The dollar eased but remained near four-month peaks on continued optimism about the U.S. economy.

“It has been hard to restrain our U.S. growth forecast in recent months. We’ve been upgrading our estimates almost as fast as we lowered them a year ago,” Carl Tannenbaum, chief economist at Northern Trust, told the Reuters Global Markets Forum.

Bank stocks gained 1.9% as the Fed said it would lift income-based restrictions on bank dividends and share buybacks for “most firms” in June after its next round of stress tests.

The yield on benchmark 10-year U.S. Treasury notes rose to 1.66%, lower than a spike last week to 1.75% that sparked a selloff on inflation fears and a potential Fed rate hike – something the Fed has pledged not to do.

The market is concerned that all of a sudden the Fed is forced to tighten against its repeated mantra that it will not, said Marvin Loh, a senior global macro strategist at State Street Global Markets.

“The real concern is that things overheat and the Fed might be forced to change its mind,” he said.

Ten of the 11 major S&P sectors rose, with only the communication services index in the red.

Nio Inc slumped 4.8% as the Chinese electric vehicle maker said it would halt production for five working days at its Hefei plant due to a shortage in semiconductor chips.

Latest data showed U.S. consumer spending fell by the most in 10 months in February as a cold snap gripped many parts of the country and the boost from a second round of stimulus checks faded, though the decline is likely temporary.

Advancing issues outnumbered declining ones on the NYSE by a 3.30-to-1 ratio; on Nasdaq, a 1.81-to-1 ratio favored advancers.