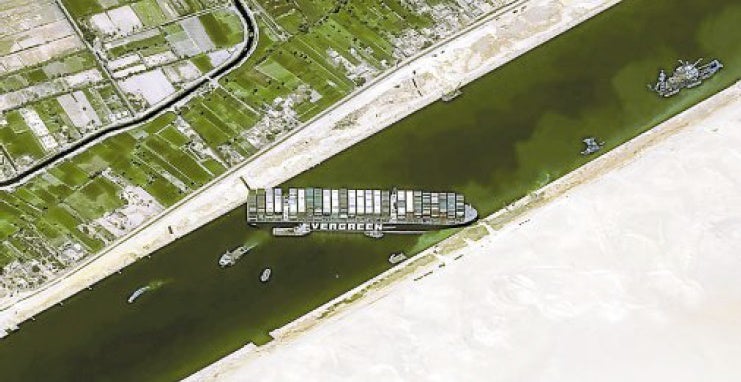 CLOGGED CANAL Seen in this satellite image, the Evergreen blocks one of the world’s most vital waterways, with still no quick solution in sight since it ran aground on Tuesday. —CNES/AFP

CAIRO—It was the ship that launched a thousand memes, with social media users sharing viral images on Thursday of a giant container vessel wedged into the banks of the Suez Canal.

The Evergreen first got stuck across the vital shipping route on Tuesday, with Egyptian authorities still desperately trying to shift the 59-meter-wide and 400-meter-long ship.

Days into the saga, and with no quick solution apparent, Twitter users decided the vessel was the perfect encapsulation of the past two years.

One of the most shared photographs was taken from a ship following the Ever Given, and showed it blocking the canal.

“A pangolin fluttering their eyelashes at a bat,” read the caption above the Evergreen, while the text on the blocked vessel said: “Any hope of enjoying 2020.”

“Me dutifully chipping away at my tasks,” read another, overlaying an image of the container ship dwarfing a lone digger attempting to dislodge it.

A slice of zeitgeist

A GIF from “Austin Powers: International Man of Mystery”—where the main character is stuck in a shuttle car reversing back and forth in a narrow tunnel—was Photoshopped with the vessel.

Tapping into the zeitgeist of the past few months, a photograph of a pair of construction workers surveying the ship was captioned “mindfulness” while text above the wedged vessel read: “My anxiety from all the death and Covid.”

And adding profanity to serious industrial incident, it appeared Thursday that prior to getting stuck the pilot—in a series of moves that have not been confirmed as intentional—traced the outline of a giant penis in the water, according to ship VesselFinder.com.

Finally, many online users shared Amazon’s customer review page for the book “How To Avoid Huge Ships,” with one writing: “Hello Suez Canal library, how can I help?”