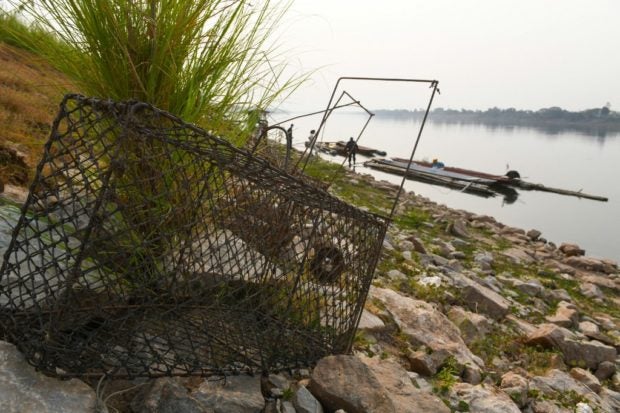 This picture taken on March 15, 2021 shows a cage along the bank of the Mekong river in the northern Thai region of Nong Khai, bordering Laos. Thailand has already seized more than 80 million methamphetamine pills just in the last six months, a record haul partly blamed on a supply glut caused by the coronavirus pandemic, but now the United Nations warns of an even bigger deluge as Myanmar’s legal economy tanks following weeks of nationwide unrest and strike action following the military takeover. (Photo by Panumas SANGUANWONG / AFP) / TO GO WITH Thailand-Myanmar-crime-drugs, FOCUS by Lisa Martin

NONG KHAI, Thailand — A village watchman trains his binoculars on a suspicious fishing boat — the first line of defense as Thailand braces for a fresh methamphetamine influx after a coup in neighboring Myanmar.

The kingdom’s narcotics bureau has already seized more than 80 million “yaba” pills just in the past six months, a record haul partly blamed on a supply glut caused by the coronavirus pandemic.

But now the United Nations warns of an even bigger deluge as Myanmar’s legal economy tanks, following weeks of nationwide unrest and strike action following the military takeover.

“If past actions are an indicator of what’s coming, then we’re likely to see another increase in synthetic drug production,” said Jeremy Douglas of the UN Office on Drugs and Crime.

He told AFP that organized crime groups and allied militias across the border were likely working to strengthen their positions while Myanmar was in turmoil.

“The best way to make big money fast is the drug trade, and the pieces are in place to scale up,” Douglas said.

Synthetic drug production is already the number one revenue source for several insurgent groups and militias in lawless pockets of Myanmar close to the borders of Thailand and Laos.

The frontier traversing the three countries makes up the “Golden Triangle” that has for decades been the hub of Southeast Asia’s lucrative drug trade.

The recent supply glut has kept the street value of a meth pill in Bangkok at rock bottom prices — 50 baht ($1.66) apiece.

Methamphetamine’s more potent crystallized form normally gets sent on to wealthier overseas markets such as Australia and Japan, although pandemic transport bottlenecks have disrupted that trade.

Heavier patrols along the Myanmar border have not deterred traffickers, with Thai authorities estimating that around three-quarters of illegal drugs entering their territory are now routed through Laos.

The battle against the meth trade between the two countries, divided by the Mekong River, is hampered by a lack of manpower and equipment such as night-vision gear, motion sensors and motorbikes.

The provincial naval unit in charge of monitoring the border has also been forced to increase land patrols because drought and Chinese-funded dams upstream have caused water levels to drop.

Authorities have in recent months begun using dedicated village volunteer groups living along the river to provide around-the-clock surveillance of the border.

Their local knowledge is helping spot drug-runners trying to blend in with ordinary fishermen on the Mekong.

“We always spot the boats with the fake fishermen,” said Rachin Sinpho, 58, who heads up a volunteer group at a village in Nong Khai province.

“They won’t come to the riverbank. If there are many fishermen out… they won’t go close to them and will stay away.”

Dragonflies buzz overhead as Rachin points out a shed on the Laos side of the Mekong river that is reported to be storing a ton of yaba tablets.

He says his team is busiest in the first hours before dark and the last before dawn. Drug traffickers time their movements with changeovers in the local police force’s shifts.

The volunteers do not make arrests because they are unarmed and some drug smugglers have guns.

But they do tip off police to the movements of traffickers, as was the case during the last big arrest at a neighbouring village.

“The drug-runners carried the packages from their boats and hid the drugs in the grass and trees on the riverbank,” Rachin said.

“They sent a car to the spot to collect the drugs. Just as the car was leaving, the police came and arrested them and found five million yaba tablets.”

Duangphaisri Ninket, who runs an accommodation business in the village, said she feels safer knowing Rachin’s team are keeping watch.

But the 54-year-old still worries about meth taking hold in her community.

“I’m afraid if they start selling drugs in my village it will affect the youth. They will become addicts,” she told AFP.