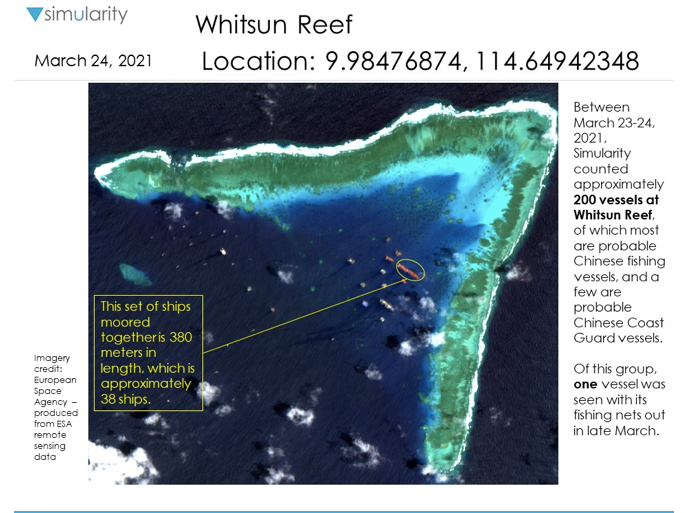 MANILA, Philippines—Chinese vessels appear to be freely coming in and out in large numbers at Julian Felipe (Witsun) Reef in the West Philippine Sea since late 2020, satellite images showed.

US-based tech firm Simularity on Friday (March 26) said images of what are believed to be Chinese ships had been “mooring, arriving and departing” at the reef, which is inside the Philippines’ exclusive economic zone, as early as November 2020.

The number of stationary ships dropped briefly in early February 2021 but those entering and leaving the reef regularly had been in large numbers, Simularity said.

Images from December 2020 were believed to show fishing ships moored together, each as wide as 200 meters, which was a sign they were there not to fish.

“At an average width of 10 meters per ship, that’s a collection of 20 ships,” Simularity said.

From March 23 to 24, Simularity counted at least 200 vessels at the reef, mostly believed to be Chinese fishing vessels and a few Chinese Coast Guard ships.

Only one vessel had its fishing net out in late March, according to Simularity.

The Philippine government had already protested the presence of over 200 Chinese vessels at the reef, which were believed to be manned by maritime militia.

Determining the real character of the Chinese militia vessels had been tricky. Most pose as fishing vessels, but they are not actually fishing. Militias are being used to aggressively enforce China’s territorial claims in the South China Sea, including West Philippine Sea, without sparking overt war. Formally, they are part of China’s armed forces.

The tactic is referred to by security experts as “gray zone strategy,” in which civilian-looking vessels are used by China “to avoid direct responsibility by arguing that these are not government vessels.”

China has denied that the ships inside the Philippines’ EEZ were militia but were fishing vessels taking shelter from bad weather.

The weather has been fair in the country in recent weeks, however, adding suspicions to China’s claim.

The ships have not left the area in mockery of the Philippine diplomatic protest and a demand made by Defense Secretary Delfin Lorenzana for the Chinese vessels to leave.

“We call on the Chinese to stop this incursion and immediately recall these boats violating our maritime rights and encroaching into our sovereign territory,” Lorenzana said, accusing China of “provocative action” by “militarizing the area.”

Open source ship tracker MarineTraffic showed that the Philippine Coast Guard’s multi-role response vessel BRP Cabra has been at the vicinity of the reef on Friday.

‘Those ships are not fishing’: Lorenzana doubts China yarn on vessels in PH EEZ