THE COUNTRY’S TOP 1,000 corporations saw their combined gross revenue grow at its slowest pace in four years in 2019, providing a baseline for how these firms were doing before the coronavirus pandemic hit. 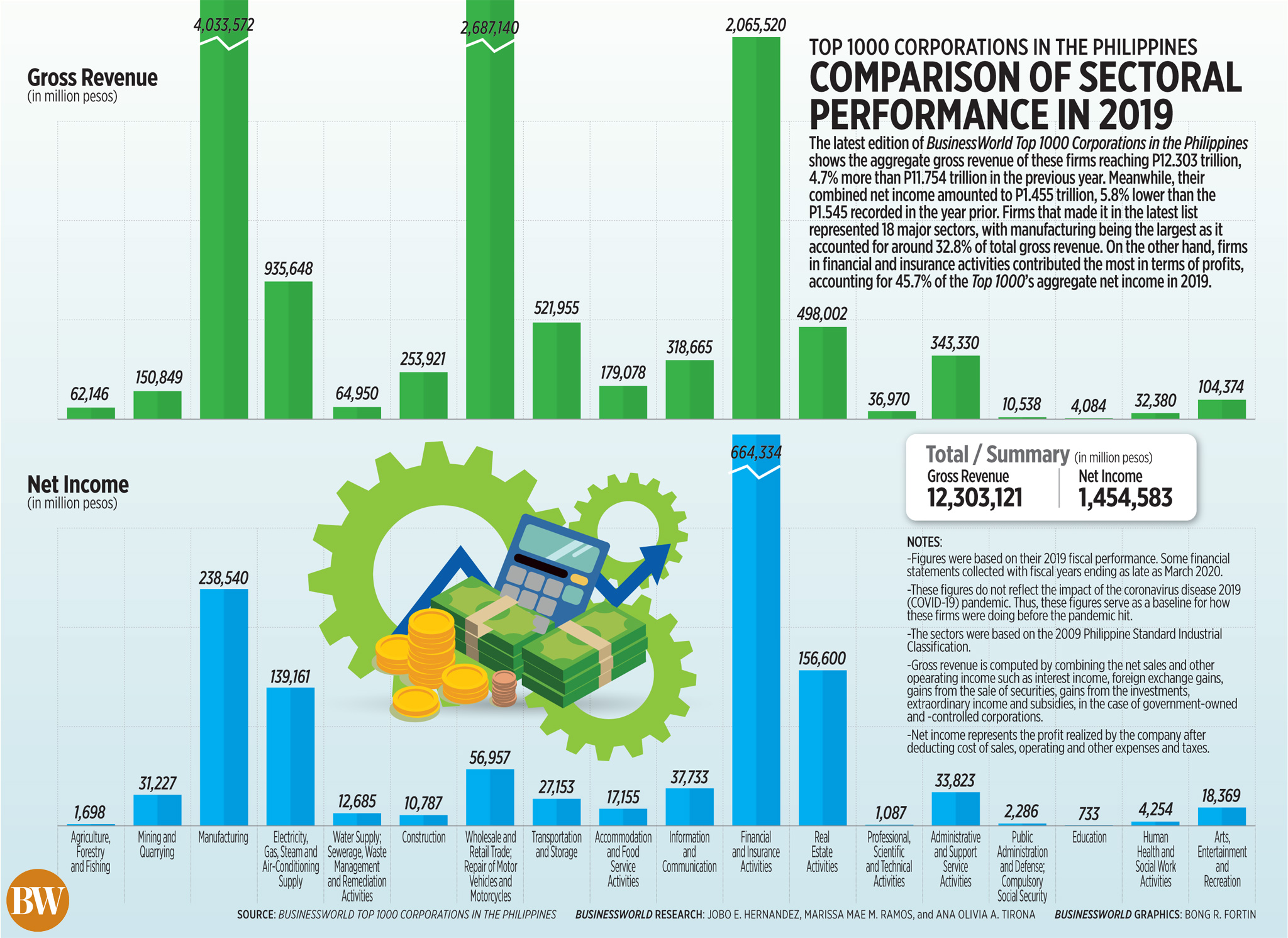 To recall, Philippine gross domestic product (GDP) growth in 2019 grew at a revised rate of 6% at constant 2018 prices, the slowest in eight years or since 2011’s 3.9%. Similarly, nominal GDP growth — or output expansion based on current prices — was reported at 6.9% that same year, the slowest since the 5.6% showing in 2015.

It should be noted that the latest data refer to firms’ performance in 2019, a year before the coronavirus disease 2019 (COVID-19) pandemic sent companies operating at below full capacity. Hence, these figures provide a baseline for how the country’s largest corporations were doing before the pandemic hit. The Philippine economy declined by 9.5% in 2020, its worst performance since the 1940s.

The latest edition of the Top 1000 had a gross revenue cutoff of P1.870 billion, lower than the previous edition’s P2.218 billion, considering the financial statements that were collected.

Petron Corp. grabbed the top spot on this year’s list with P323.273 billion in gross revenue. However, this was 10.5% lower compared with its gross earnings of P361.353 billion in 2018. The oil refiner and distributor also saw its profits plunge to P114.923 million from P6.337 billion the year before.

The Top 1000 publication also provides a separate table ranking of these firms on a consolidated basis, that is, a parent company and its subsidiaries are treated as though they are a single entity. This is different from the main top 1,000 list wherein parent-only financial statements are used to account only for parent firms’ equitized earnings of their subsidiaries and associates. This was expanded to 200 firms in the latest edition from 100 in the previous release.

Of the 18 sectors represented by the top 1,000 corporations, 16 recorded revenue growth with five showing double-digit increases. Gross revenues of manufacturers, which made up 32.8% of the 2019 total, only went up by 0.7%, while those in the wholesale and retail trade (21.8% share) and financial and insurance activities (16.8% share), rose by 7.3% and 6.9%, respectively.

Multinational companies included in the latest edition made P4.204 trillion, 2.9% more than in the previous year and accounting for 34.2% of the Top 1000.

BusinessWorld Top 1000 Corporations in the Philippines can be purchased at select branches of National Book Store, Powerbooks, Fully Booked, Office Warehouse and Rustan’s Supermarket. These can also be purchased directly through BusinessWorld’s Circulation Department at (+632) 8535-9940 loc. 250-258 or e-mail at circ@bworldonline.com.