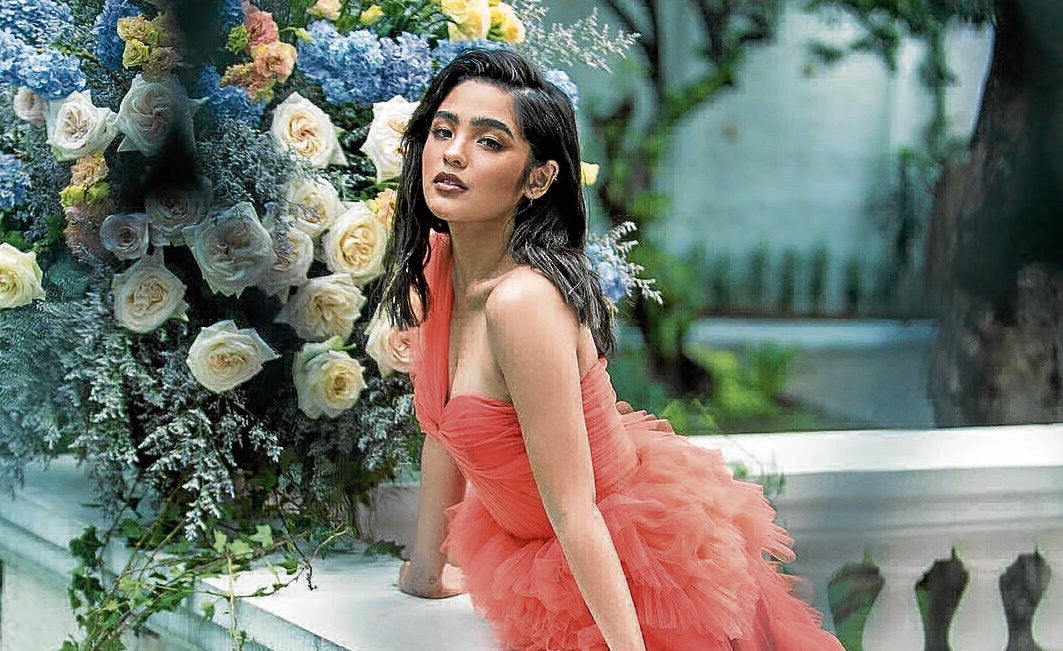 Teen star Andrea Brillantes said she would sometimes wear a blindfold as she does her chores at home in order to prepare and “give justice” to her role as a visually impaired person in her new soap series “Huwag Kang Mangamba.”

“Actually, I requested that for my next project I’d be given a role of a good person, if not, someone with a personality that’s opposite Marga’s (her character in the defunct series ‘Kadenang Ginto’). This is because I want to be able to showcase what else I can do as an actor. I don’t want to limit myself to just being a kontrabida. I want to be able to take on more challenging roles,” said the 18-year-old during a recent virtual media gathering organized by Dreamscape Entertainment, producer of the new ABS-CBN series.

In “Huwag Kang Mangamba,” Andrea plays Mira, a blind orphan whose faith and trust in God (known here as “Bro”) gives her a positive outlook in life. Despite her disability, she travels to the town of Hermoso to search for her mother. She figures in an accident along with Joy, a rebellious daughter who has completely lost faith in God because of her personal pain and longing for her family’s love.

However, both of them miraculously escape death in order to fulfill Bro’s mission of rebuilding the church in Hermoso.

When it came to preparing for other aspects about Mira, Andrea said there wasn’t much effort because Mira and Analiza (a character she played in 2013) are so similar in personality.

“I had enough practice with Analiza. What I really focused on is Mira’s being visually impaired,” she pointed out. “I want to be able to move as truthfully as I can, so I would wear a blindfold at home as I do household chores. Mira is like that. She insists on helping out at home even though she is blind. I felt that I also needed to practice that. I’m blindfolded when I’m tidying up the house or when I’m fixing my stuff in the closet.”

According to Francine, Joy is also the exact opposite of her “Kadenang Ginto” character, Cassie. “I’m thankful to have been given this kind of project. This is actually a dream role—to be a bida-kontradiba. I’m glad that I’m able to explore as an artists. I’m now learning more about myself, too. With playing Joy, I’m able to test my limits.” she explained.

When asked for his reaction to the fact that the girls would be taking on characters different from those they played in “Kadenang Ginto,” Kyle said: “I’m excited for them because I know that they will be able to show their versatility as actresses with this one. We all know that these two are very good artists. I’m happy as a costar, and as one of their friends, that they will be able to show something different in our new project.”

Andrea, who turned 18 recently, celebrated the milestone with covers for Mega and Metro magazines. She also organized a personal photo shoot that carried the theme “Pieces Season,” some photos of which she posted on her Instagram account. She, however, clarified that she is “not yet ready for sexy and more mature roles;” and that the photo shoot were done since there was no debut celebration organized for her.

“I’ve watched the special features done by ABS-CBN for Ate Kathryn (Bernardo) and Julia (Montes), but since we’re in a pandemic we can’t do that now. I just thought of something special to do since for some reason, especially here in the Philippines, being 18 is an important milestone for a woman,” she explained. “As for the photo shoots for Metro and Mega, I’m so grateful to them. I feel their support. They reached out to me and even asked if I had wanted a party. I really felt how it was like to be a debutante.”

“We’ve gotten to really know each other well because of work. Our bonding is now so deep that it came to a point when we would already get annoyed with each other,” said Seth of Andrea, laughing. “But when it came to dealing with personal problems, we’re here for each other. We would always give each other advice on what to do. Ours isn’t just a working relationship anymore.”

He added: “She would give me pointers on how to approach work mentally, especially because she’s been in this business longer than I do. We scold each other by saying, ‘Hoy! ‘Wag gan’yan! Pangit ‘yan!’ or ‘Don’t do that in front of many people!’”

The series premiered on March 22, 8:40 p.m. (after “FPJ’s Ang Probinsyano”) on TV5 and A2Z channel on free TV. Viewers may also watch it on the iWantTFC app and website, as well as on Kapamilya YouTube channels and Facebook pages.