U.S. State Representative from Georgia Park Cannon said she was released after being arrested on Thursday for standing outside governor Brian Kemp’s office as he signed a law setting broad curbs on voting in the state.

Activists said the law championed by Republicans aimed to curtail the influence of Black voters who were instrumental in state elections that helped Democrats win the presidential race.

A video posted by Cannon’s lawyer shows state police officials taking her away from a government building, as she demanded to know why she was being arrested.

She later tweeted that she had been released from jail, and said she was not the first and won’t be the last Georgian to be arrested for fighting voter suppression. 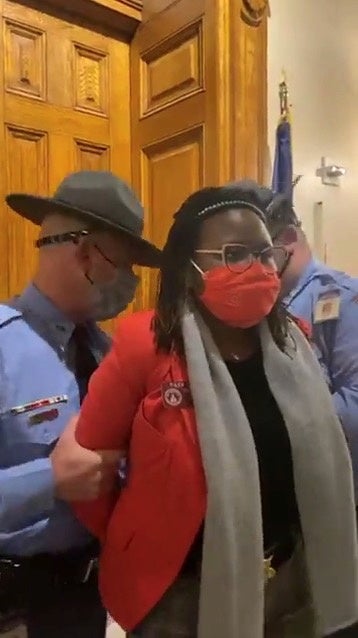 Police officers place U.S. Representative Park Cannon in handcuffs in the State Capitol in Atlanta, Georgia, U.S. on March 26, 2021, in this still image obtained from a social media video. Courtesy of Tamara Stevens/Social Media via REUTERS.

“I’d love to say I’m the last, but we know that isn’t true,” Cannon tweeted.

Kemp’s office and the Georgia State Patrol did not immediately respond to Reuters’ requests for comments.