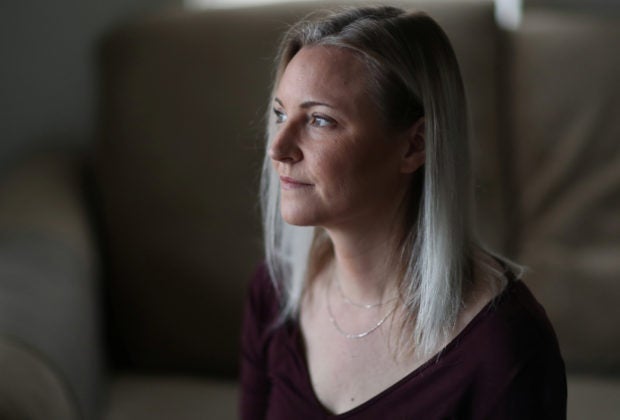 Heather Martin, a survivor of the Columbine high school shooting and founder of The Rebels Project, poses for a portrait at her home in Centennial, Colorado, U.S., February 16, 2019. REUTERS/Leah Millis/File Photo

Even now, more than two decades after the Columbine school shooting, survivor Heather Martin is trying to learn how to take care of herself.

She struggled with her mental health for a decade before seeking professional help. There were dark days and years including intense trauma after the 9/11 attacks. Those struck more than two years after she barricaded herself in a Columbine classroom with 59 other students in 1999.

Martin, 39, heard about the Sept. 11, 2001 attacks over the radio while driving to work. She has blacked out most of what happened next. She only remembers her coworkers at a restaurant asking why she was hiding behind an ice machine.

Survivors of mass shootings like Martin, family members of those who died in those attacks and psychologists agree that people who have experienced violence like the recent killings in Boulder and Atlanta need the care of mental health professionals, not just in the immediate aftermath but for years or decades afterward.

The United States lacks that effective and ongoing care. Survivors of mass shootings have stepped in themselves to fill gaps in a system that is a patchwork of local resources not designed to provide sustained response.

“All the help in the world is there for the shooting victims right after the event,” Martin said. “But society quickly forgets and moves on. The victims and their families cannot forget, ever.”

Thirteen years after Columbine, a gunman opened fire in nearby Aurora, Colorado, killing 12 people in a movie theater.

A few days after that shooting, Martin received a text from a fellow Columbine survivor, Jen Hammer, asking if she wanted to form a support group for shooting victims. She agreed immediately.

“We wanted to offer something that we didn’t have access to in 1999 – peer support,” Martin said.

In forming their Rebels Project, Martin and several other Columbine survivors had to confront lingering demons.

“We learned that 13 years later we were still struggling – there was a whole group of us who were still a mess,” she said.

Like the Columbine survivors, Shiva Ghaed has found mental health support to be lacking.

Ghaed started thinking about the missing support shortly after she survived the 2017 Las Vegas shooting at a packed music festival that killed 60 people and injured nearly 900.

A San Diego-based clinical psychologist who well before the shooting specialized in PTSD and trauma disorders, Ghaed escaped the Las Vegas shooting without physical injury.

The National Center for PTSD has estimated that 28% of people who have witnessed a mass shooting will suffer from post-traumatic stress disorder and about one-third acute stress disorder.

Virtually all who do suffer PTSD can recover with the proper treatment, the course of which can vary widely depending upon the individual, Ghaed said.

“After I came home following the Las Vegas shooting, I realized, ‘Oh, my God, I’m not hearing anything about any mental healthcare support for those who were there,’” she said.

She immediately formed a weekly support group. Amid the pandemic and other issues, that group has now disbanded. Ghaed continues to seek ways to provide support through her Route 91 Therapy website.

Sandy Phillips, whose daughter Jessica Ghawi was among those killed in the 2012 Aurora movie theater shooting, created the Survivors Empowered group.

A day after Monday’s shootings in Boulder, Phillips’ group worked with three trauma therapy organizations to ensure that survivors and their families would not need to wait for government assistance or insurance approval to speak with a counselor.

“We know that trauma therapy early on gives a huge difference in the ability to at least move forward in a healthy manner,” Phillips said.

Laura Wilson, a clinical psychology professor at the University of Mary Washington in Virginia, whose research has focused in part on survivors of mass shootings, said she is concerned that the pandemic is overlooked as a complicating factor.

“Community is a really powerful mechanism for recovery,” Wilson said. “The pandemic has complicated that because people can’t get together; they can’t safely hug someone outside of their household.”

Wilson said the mental health community agrees that the most efficient therapies are cognitive processing therapy, which seeks to change negative beliefs and behaviors, and prolonged exposure therapy, in which a patient gradually confronts the cause of anxiety.

Wilson’s research has shown that mass shootings – while representing just about 1% of gun deaths in the United States in any given year – have an outsized impact on the public at large.

Those directly involved are most acutely affected, “but individuals across the country that don’t personally know anybody impacted can experience a psychological reaction,” Wilson said. “We see people posting on Twitter that their loved one was just going to buy milk, and the next thing they knew they were being shot at or killed, and that can impact anybody regardless of proximity to the event.”

Colorado state Representative Tom Sullivan only recently embraced therapy to cope with the loss of his son Alex, who was murdered at the Aurora movie theater in 2012 on his 27th birthday. Sullivan poured his energies into activism and politics, pushing for stricter gun laws.

Michael Morisette also channeled grief into activism after his daughter Kristina was murdered in the Borderline Bar and Grill shooting in 2018, when a gunman killed 12 people in Thousand Oaks, California.

Morisette choked on his sobs as he spoke about his daughter’s death at age 20 and his efforts to help other trauma victims. He left a retail sales job to become the California outreach coordinator for Give an Hour, an organization that provides no-cost mental health care.

He said family members of mass shooting victims “need peers who are walking alongside us, who have been through what we face.”

Coni Sanders, whose father Dave was a teacher and basketball coach at Columbine and the lone adult killed, said her grief motivated her to become a therapist who works with violent offenders in the Denver area. She hopes to prevent future tragedies.

“But for many people that does not fit. I didn’t go to therapy until a few years after, which I found I couldn’t cope by myself anymore,” she said. “It’s a tricky journey, and support is needed at different times for years.”