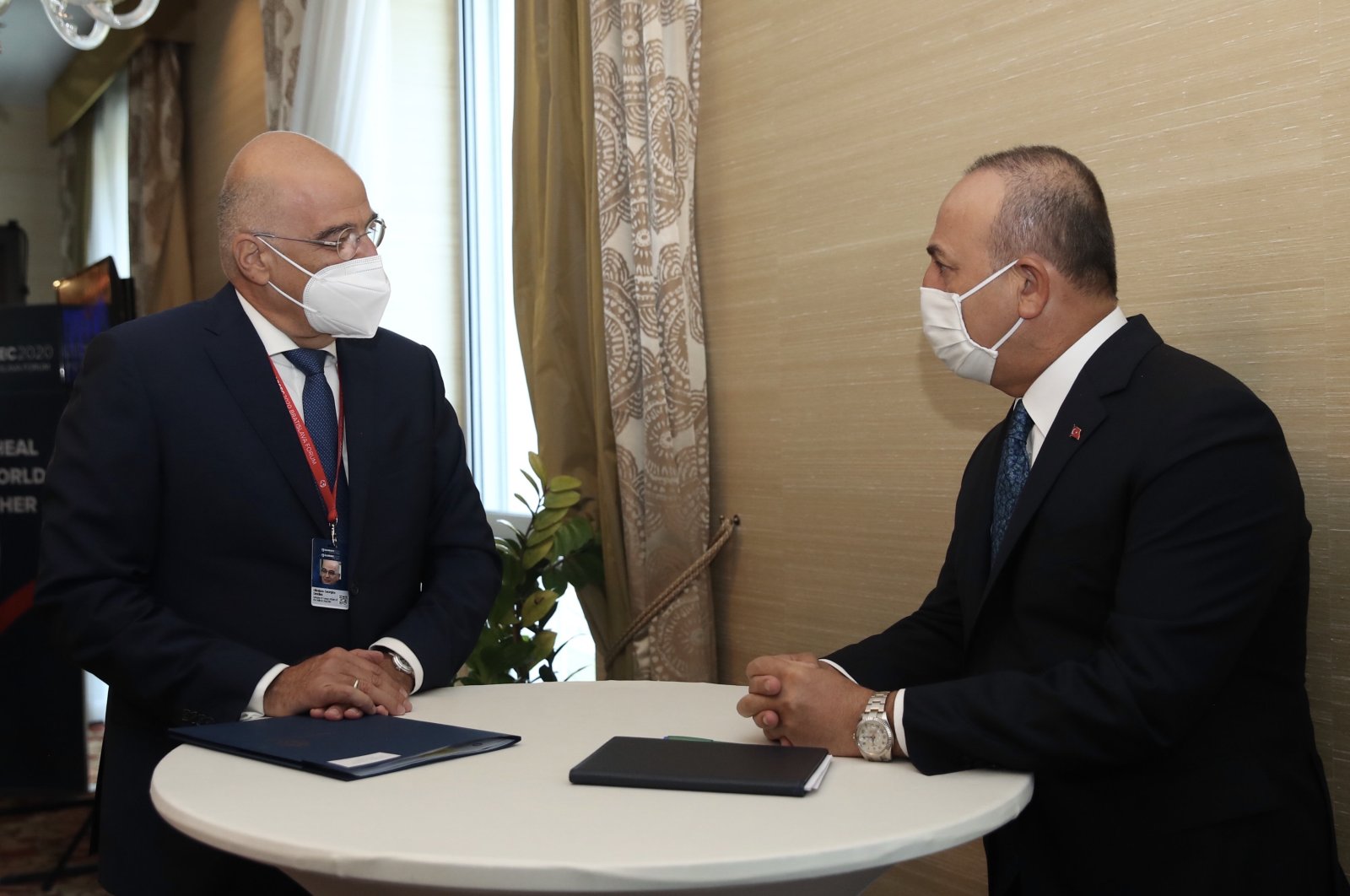 Reiterating Turkey’s demands for a fair sharing of resources in the Eastern Mediterranean, Çavuşoğlu said Ankara has always clearly demonstrated its determination on the issue.

Regarding the recent exploratory talks between the two countries, the minister said the bilateral meetings will continue in the following period.

“We will hold a meeting at the foreign ministers level in the coming period,” Çavuşoğlu told a news conference in Ankara. “We believe it is beneficial for these talks to be at the level of leaders as well, so when Nikos Dendias comes to Ankara, we will also discuss the meeting of our President Tayyip Erdoğan and Greek Prime Minister (Kyriakos) Mitsotakis,” he said.

He added that he will also visit Greece in the near future.

The remarks came after Dendias on Tuesday expressed willingness to meet his Turkish counterpart Çavuşoğlu, but said “it must be carried out in the right climate.”

Speaking at a news conference after meeting his Palestinian counterpart Riyad al-Maliki in the Greek capital Athens, Dendias briefly touched upon the new round of consultative talks between Turkey and Greece.

Dendias said he hopes that talks will lead to finding a common ground to resolve “the sole bilateral dispute” between the two countries.

“In other words, the delimitation of the Exclusive Economic Zone (EEZ) and continental shelf in the Aegean and the Eastern Mediterranean, in accordance with international law and the U.N. Convention on the Law of the Sea,” he said.

Dendias noted that political consultations between the Turkish and Greek Foreign Ministries are scheduled to take place in Athens on Wednesday.

“At this point, I would like to add – and I have said this in the past that, I am willing to meet with my Turkish counterpart and friend Mevlüt Çavuşoğlu, but for such a meeting to have a point, of course, it must be carried out in the right climate,” he added.

On the Turkish side, President Erdoğan late Tuesday ruled out making any concessions to Greece concerning its rights in the Eastern Mediterranean.

“Turkey’s determination continues unchanged,” he told journalists during a news conference. “In other words, there can be no question of us making any concessions.”

Senior diplomats from NATO members Greece and Turkey failed to reach a breakthrough on Tuesday during the latest round of talks on their standoff over Eastern Mediterranean borders and energy rights.

Although Dendias told reporters afterward that his country was “participating in these talks in good faith,” the two sides seemed far apart both on the scope and details of the talks.

Tuesday’s talks were the second meeting this year after the two sides met in Istanbul in January, ending a nearly five-year pause in the dialogue – and taking place only after European Union pressure.

The latest talks did not start on the best note after a diplomatic note from Ankara a day earlier drew a line in the sand.

The note was addressed to Israel, Greece and the EU, telling them to seek Ankara’s permission before proceeding with work on a proposed undersea power cable in disputed Eastern Mediterranean waters.

Both sides cite a range of decades-old treaties and international agreements to support their conflicting territorial claims.

Hostilities flared last year when Ankara sent a research ship accompanied by a navy flotilla into waters near the Turkish coast that Greece asserts belongs to it – a claim the EU supports. Those waters are thought to be a possible source of natural gas reserves. Turkey is furious that Athens is using its web of islands to lay claim to huge swathes of the Aegean and Mediterranean seas. Turkey, which has the longest continental coastline in the Eastern Mediterranean, has rejected maritime boundary claims made by EU members Greece and the Greek Cypriot administration, stressing that these excessive claims violate the sovereign rights of both Turkey and the Turkish Republic of Northern Cyprus (TRNC).

But at a December EU summit, member states drew up a list of Turkish targets for sanctions over what it said had been Ankara’s “unilateral actions and provocations” in the Eastern Mediterranean.

The EU is currently preparing an evaluation report on its relationship with Turkey. European officials say there have been signs of improvement in recent months.

In a videoconference with military officers, Turkey’s Defence Minister Hulusi Akar earlier this week called on Athens to abandon its “uncompromising and provocative attitudes.”

He denounced what he said were Greece’s efforts to drag the EU and the United States into what was essentially a bilateral dispute. “They will not get anywhere like this,” he said.